Continue to Deadline SKIP AD
You will be redirected back to your article in seconds
Skip to main content
November 21, 2019 10:47am 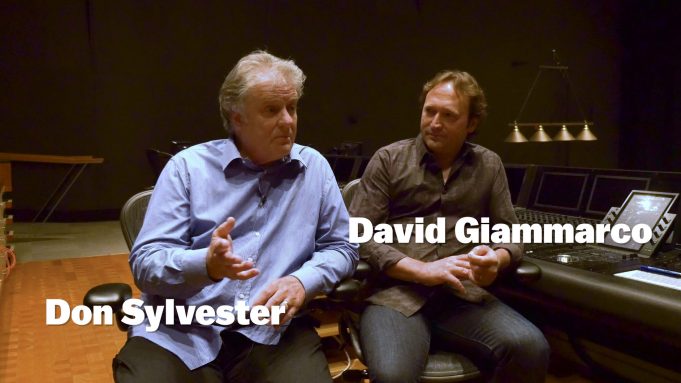 The latest film from Oscar nominee James Mangold, Ford v Ferrari isn’t just a spectacular visual experience, or a remarkable technical achievement. It’s a film that you feel viscerally in your gut—and that’s thanks, in no small part, to Don Sylvester and David Giammarco, sound artists who have worked with the director over the course of a number of films.

When supervising sound editor Sylvester read the script, “it was like, this is the best thing that ever happened to me. Everybody who’s in the sound business, cars are like your go-to. You want to do a car movie,” he says, in the latest installment of Deadline’s Production Value video series. “When I read it, I knew what it was going to sound like. I could just picture it in my head.”

Like Sylvester, sound designer Giammarco grew up loving cars, and while Ford v Ferrari features a great number of them, the star vehicle was undeniably the Ford GT40. “I really wanted to record a real GT40, but you know, there’s like 11 of them in the world, and they’re all multi-million dollar cars, and I don’t see anybody offering to lend us their car, so we can race around a track and record it, a bunch of geeks coming in with microphones,” Sylvester remarks.

Thankfully, the sound editor was ultimately able to track one down. “We found a real GT40 in Ohio, and this man is a collector, who built his own out of genuine Ford parts. Ford came and inspected it and said, ‘Yes, this is a real GT40,’ gave him a serial number. So, he drove the car, we recorded it, and that was the big catch,” he explains. “Because if we didn’t get the GT40, we would not have a film.”

In terms of the film’s sound, “Jim really wanted the cars to have a lot of growl and a lot of heft.  They were characters to him, just as much as Christian Bale was, just as much as Matt Damon was. These cars have their own personalities,” Sylvester adds. “When we got the real cars, they had the sounds that he intrinsically knew he wanted. They had the growl, and the low end, and just the heft that made them such great players.”

For Giammarco, who also served as Ford v Ferrari’s re-recording mixer, one of the greatest challenges with the film was to make sure viewers would feel the power and intensity of the vehicles on screen, without being overwhelmed by a wall of sound. “It was making sure we hopefully didn’t get too loud and too big, and walking that balance between effects, and music, and dialogue, in a good way that supported what was being put on screen,” he reflects.

To Sylvester, the experience on the action drama embodies what is most exciting about working in the sound department, in general. “I’ve always looked at film as [something that] takes you places you can’t go. It takes you to places in time that you never lived in, locations you can’t go to. I like putting myself in places that I’ve never been to before; like, I’ve never been to Le Mans. In 1960, I wasn’t there,” the sound editor notes. “That’s our craft, is sort of imagining what it would be like to be in these places. It just gives me a kick when I can find an actual sound from that era, and blend it into sounds that I think would sound correct, and people say, ‘Yeah, that’ll work. I believe it.’”

For more from our conversation with Sylvester and Giammarco, take a look at the video above.