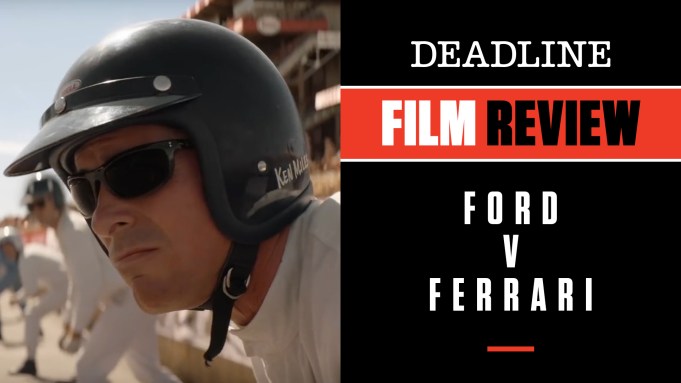 Put all of Hollywood’s classic racing dramas on the track, including Grand Prix, Le Mans, Days of Thunder and Rush, and they all come up short of the checkered flag against James Mangold’s smashing Ford v Ferrari, a truly exciting movie in the genre that never forgets it isn’t as much about as the cars as it is about the human beings driving them. Mangold also is keenly aware of how to deliver a crackerjack original entertainment for adult audiences that represents big-screen moviemaking at its finest. On every level — from its cast, script and direction to cinematography, sound, editing and all the crafts — this is a production that has its roots in what movies should be all about.

Teaming Matt Damon and Christian Bale to superb effect, the film revolves around the true story of the 1960s rivalry between automakers Ford and Ferrari that all comes to a head at the 24 Hours of Le Mans in 1966. That’s where wild longshot Ford decides to take on the Italians and Ferrari, which is a perennial winner of the race. Its stars are neither of the title characters but rather two guys integral to Henry Ford II’s bold stroke to create a car that can one-up Ferrari on the track the latter owns. After being rebuffed in an attempt to buy the Italian car company, and then being told off by its founder Enzo Ferrari (Remo Girone), Ford (Tracy Letts) enlists Carroll Shelby (Damon) a one-time champion driver-turned-car designer, to come up with a vehicle that can do the trick.

Shelby knows, however, that the guy he really needs on his side is a somewhat volatile, opinionated British racer named Ken Miles (Bale), who has just the right amount of attitude and talent to help pull this off. The two of them face off against corporate mentality and “suits” who always seem to stand in the way of true pioneers and creators, but those conflicts aren’t enough to kill off the spirit and skills of this pair, who aim to achieve the impossible with good ol’ American knowhow. The humanity of Shelby, whose heart condition cut short his racing career, and Miles, whose wife and son help show off his softer side, always is front and center as the film builds towards the ultimate race in a way that will have audiences engaged from start to finish line.

That none of it is predictable — and for full enjoyment it is best to stay away from Wikipedia and discover the outcome as these filmmakers want to show it — is a plus in an old-fashioned crowd-pleasing entertainment that doesn’t miss a beat. Mangold is too good a filmmaker to let us down, and he expertly jumps genres in a career that includes such disparate films as Girl, Interrupted, Logan, Walk the Line and 3:10 to Yuma. He is the Howard Hawks of his era, but even Hawks and his one racing film, Red Line 7000, couldn’t match up to the level of skill Mangold pours into Ford v Ferrari.

Damon and Bale are strong leading male roles. It’s the kind of matchup of stars we rarely get these days, but this year we have had a few including Once Upon a Time in Hollywood and The Two Popes. Bale is really the main lead between the two, and he again shows the kind of versatile talent that makes him perhaps the most interesting film actor working today. But Damon is no less impressive. These are truly movie-star roles, and both are at the top of their game.

Letts is hysterical as the over-the-top Ford, and there is fine work as well from Jon Bernthal as Lee Iacocca; Ray McKinnon as Phil Remington; and Josh Lucas as kiss-ass suit Leo Beebe, a guy you love to root against. Caitriona Balfe as Mollie Miles and Noah Jupe as Ken’s son Peter add warmth and the right touch for the family scenes. The script from Jez Butterworth, John Henry Butterworth and Jason Keller hits all the right notes in a film that makes me feel pretty good about the future of movies, as long as they can still make ’em like this.

Producers are Peter Chernin, Jenno Topping and Mangold. Disney releases the 20th Century Fox film on Friday. Check out my video review at the link above, which includes scenes from the movie.

Do you plan to see Ford v Ferrari? Let us know what you think.