Continue to Deadline SKIP AD
You will be redirected back to your article in seconds
Skip to main content
February 4, 2020 11:41am
1Comments 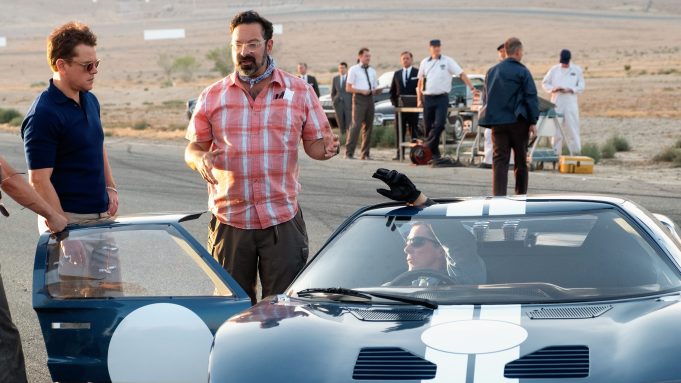 With ballots due at 5PM today, Disney’s 20th Century Studios Ford v. the Ferrari raced to the Oscar finish line with its final screening of the season last night. The James Mangold-directed action drama is up for four Oscars: Best Picture, Editing, Sound Editing and Sound Mixing.

It’s been roughly a seven-year journey for Ford v. Ferrari from development to Sunday’s Oscars and it’s a project that two-time Oscar nominee James Mangold had a keen interest in as directors like Michael Mann and Joseph Kosinski attached themselves and dropped off.

More than racing, it was the pic’s character-driven narrative about two renegades: sports car designer Carroll Shelby and unruly British driver Ken Miles, whose talents are tapped by the button-down corporate culture of Ford, to build a revolutionary sports car that can potentially defeat Ferrari at the 24-hour Le Mans race in 1966. After Mangold delivered the $620M global box office success of 2017’s Logan, which after Deadpool, continued to break the mold on comic book films with a R-rating, he got his shot to take the wheel of Ford v. Ferrari. In the post Disney merger, it’s the one movie that has popped for 20th Century Studios (ne Fox) not only at the box office with over $200M WW but also during awards season. Ford v. Ferrari also reps a big win at the box office for original scripted fare in a 2019 that was laden with branded IP titles. Disney became so excited about Ford v. Ferrari, they launched it all the way back in August, out of Telluride, prior to its Nov. 15 theatrical opening.

As far as Ford v. Ferrari being an underdog sports movie, “I didn’t want to make one of those” said Mangold at the pic’s Deadline screening last night at The Landmark on Pico Blvd.

“The reason why the story appealed to me so much; it’s what it feels like to make a movie — the whole dance trying to make an expensive one of a kind object that cost $90 million in this case,” said the filmmaker who is nominated in the Best Picture category for producing the film with Jenno Topping and Peter Chernin.

Too often adult-driven pics that are 2 1/2 hours in length can be quite a drag. But Ford v. Ferrari never feels too long given its remarkable pace, propped by its blend of not only GT40s revving and heartfelt father-and-son drama, but hysterical set-pieces: Matt Damon’s Shelby freaking Ford execs out whether he’s sharply landing a plane or taking Henry Ford II for a 100-mile spin to persuade him that Miles is the right driver to win races.

“I’m always learning something from the last film to carry to the new one. I certainly think that I wanted humor in this film because it’s part of the camaraderie of doing anything in life. I didn’t want to make a pretentious movie about self-important male gods building their male-driving edifices,” adds Mangold.

“There’s something ludicrous about this activity,” said Mangold about race-car building, “it’s strange as humans that we’re building these things that can kill us. It says something about who we are as creatures.”

Also in attendance last night were Oscar-nominated sound editor Don Sylvester, sound mixing nominee Stephen Morrow, and editors Michael McCusker and Andrew Buckland, who had just returned from London where they won best editing for the movie at the BAFTAs.

Expounding on what the secret sauce is to taking a 2 1/2 hour movie feel fast, McCusker says, “It speaks to the magic that Jim was talking about. There’s real time and cinema time. Cinema time can be moments in movies that are short, but the ideas are so big, it feels long.”

“Once an idea is delivered, move on. We as humans, we digest ideas quickly. Once you got the idea, our business is done,” said McCusker, “that’s where I try to find pacing.”