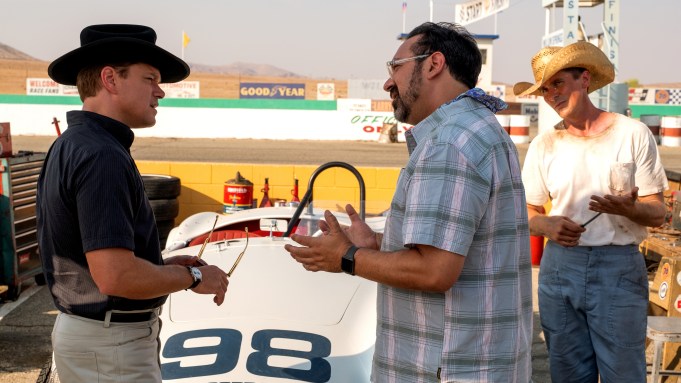 If there’s a division and an autonomy between your below-the-line departments on a film, that’s not necessarily a good thing. And what has made James Mangold excel as he has traversed cinematic genres is essentially keeping the same gang together on most of his productions.

Ford v. Ferrari reps the director’s seventh time with editor Michael McCusker, the sixth time with sound editor Donald Sylvester and the fifth time he’s worked with DP Phedon Papamichael. All were present at a recent Awardsline screening in which they broke down their various fields in making the film about Carroll Shelby and driver Ken Miles’ challenges in building the revolutionary race car for Ford at the 1966 Le Mans race.

“It’s the shorthand,” says Mangold about working with his below-the-line-team which reps the secret sauce for his character-driven movies.

“Phedon will come up to me and say: Did you see that expressions on his face? He’s always looking for the same things that Mike (McCusker) is talking about,” says the filmmaker, “We’re all in agreement as to why we’re there.”

McCusker, who together with Andrew Buckland, is up for an ACE Eddie award for the pic says it’s “a character movie with cars in it, that’s where we are all on the same page.”

“We’re all super focused on the relationships, but (in) every movie we’ve made,” adds McCusker.

“The most incredible thing you can watch is somebody’s face and their emotions,” says the editor, “and that’s an age old thing that will go on forever.”

With Disney absorbing 20th Century Fox last year, Ford v. Ferrari has been the best film at the 2019 domestic box office for the former major studio, clearing over $107.8M. Worldwide the movie has grossed close to $202M. It’s a major win for an original adult pic in a marketplace that’s been continually dominated by franchise IP.

Mangold reflecting on this achievement, “My agent literally said to me on the day this was greenlit, ‘Enjoy this. It’s the last one of these you’re ever going to make.’ It was a joke, but it wasn’t. For all of us, it’s an event when you’re doing something that is already a pre-sold piece of material or has a built-in audience. There was a time when we went to the movies and we didn’t know what we were going to see. Now, it’s the inverse. You can’t blame the studios because we’re so much part of the problem. We want the familiar.”

Some of the kudos that Ford v Ferrari is up for: Sylvester currently has two Golden Reel noms for the pic, Papamichael counts a DP nom as one of the pic’s five Critics’ Choice noms including Best Picture. This Sunday, Christian Bale is up for Best Actor in drama at the Golden Globes for playing Ken Miles, and he’s nominated at the SAGs as well where the pic is also up for best stunt ensemble.