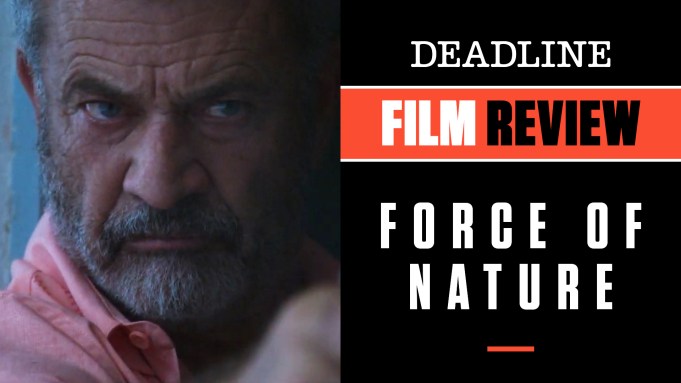 In light of daily protests following the death of George Floyd and others at the hand of police, it might not be the optimum time for a brutal cops-and-robbers action picture starring Mel Gibson. But Lionsgate is going against the tide and releasing Force of Nature this week on digital and VOD just in time for the Fourth of July holiday. Let the fireworks begin.

Putting aside the wisdom at this time of releasing a movie about disgruntled white cops roaring into action against a group of vicious art thieves in the middle of a category 5 storm, this tight and handsomely mounted little wannabe noir is not half bad. It’s not really half good either, but taken on its own terms and ambitions, and not what is going on right now on the planet, it is almost an old-fashioned item that fondly recalls a world where Dirty Harry and Lethal Weapon were the order of the day in theaters.

Force of Nature also might not be too popular for Puerto Rican viewers as it basically uses a devastating hurricane for its entire backdrop in San Juan. That is where a demoted cop named Cardillo (Emile Hirsch) is given a job worse than desk duty: rounding up residents from an apartment complex to shelter from the storm. He is teamed with another cop, Jess (Stephanie Cayo), and they make a grocery store pit stop along the way to round up Griffin (William Catlett), who is loading up on meat to feed a certain “pet,” as we eventually discover. With him in tow, and back at the apartments and the storm raging, what better time to pull off a heist? And that is exactly what they run into with a bunch of really bad guys led by John the Baptist (David Zayas), who already has shown how lethal he can be in a scene in a bank that opens the film and racks up its first couple of kills.

Turns out there is a Holocaust survivor (Jorge Luis Ramos) living there with a treasure trove of paintings this gang is after. The cops are getting more than they bargained for, and on top of all this they try to evacuate a dialysis patient with all sorts of maladies who happens to be a grizzled ex-cop named Ray, played by none other than Mad Mel himself. Ray lives with his daughter Troy (Kate Bosworth), a doctor by profession. It doesn’t take Ray long to get back into action, despite all that is wrong with him, and in no time he puts on his old vest and gets ready to rumble.

The film is competently directed by Michael Polish, who does everything he can with the mountain of clichés of the genre in Cory Miller’s script, but I have to say I liked the way it all plays out in the constantly pounding storm. It lends it some nice atmosphere, at the very least, and Hirsch and Bosworth are appealing in their roles. However, Gibson is terrific in a role he has done before, but it is a nice, juicy supporting turn even if he is the main draw here. Following the really good and even more violent genre film Dragged Across Concrete, this is the second straight Lionsgate film in which he has starred that is going pretty much straight to the home. He makes it work in pro fashion whenever he is on screen, and for Gibson completists, I would say watch.

Check out my video review with scenes from the film by clicking the link at the top.