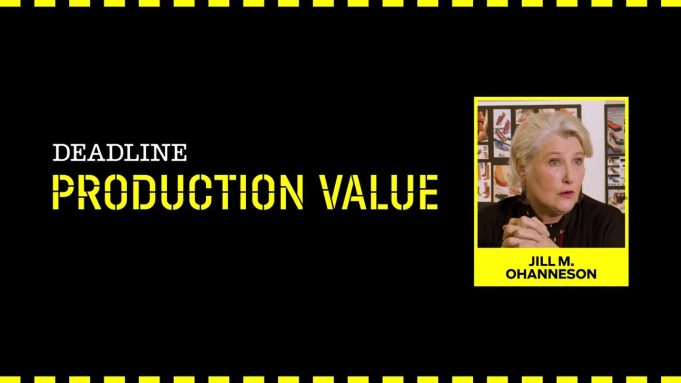 A three-time Emmy nominee who loves to jump between different genres, costume designer Jill M. Ohanneson dove headfirst into sci-fi on the Apple TV+ series For All Mankind.

For Ohanneson, whose credits include Dexter, Six Feet Under, and Bill & Ted’s Excellent Adventure, one of the most exciting aspects of the drama from the start was its basis in an alternate history. Created by Ronald D. Moore, Ben Nedivi and Matt Wolpert, the ’60s-set series sees the Soviet Union reach the Moon before the United States, examining what might have happened, if the global space race had never ended.

“One of the things [Moore] wanted to do was show that if there was a change in what originally had happened, what would that ripple effect be, and how would that ripple out into all the different parts of the world—economically, culturally, architecturally, fashion-wise,” Ohanneson says, in the latest installment of Deadline’s Production Value video series. “So, that was really inspiring to me.”

From the designer’s perspective, successfully tackling a project set in an alternate reality is a matter of striking just the right balance. In the case of For All Mankind, the goal was “to be able to show an alternate reality, but not so far out that there wasn’t a base in reality,” she says. “It’s just familiar enough that you feel like you have been there, or you know it, but things that are happening are a little bit out there, not what you were expecting.”

While grounding the series’ looks in extensive period research, Ohanneson was concerned with achieving another kind of balance, between its two overlapping worlds. First, there was “the world of NASA and all of the astronauts, and everything involved there,” she says. Then, there was the real world, centered on the challenges of domestic life in NASA families, and the evolution of gender politics within the United States. “You know, your husband’s away for months at a time, you’re trying to raise your children by yourself, and [there’s] also the timing,” the designer says. “The late ’60s, going into the ’70s, we’re starting to get into feminism and women’s movement, so there were some very interesting beats that Ron Moore wanted to hit, and I was really inspired by that.”

As a costume designer, Ohanneson’s main priority is ensuring that her costumes feel real and honest, working in service of the story at hand. “That, for me, of course starts with research,” she says. “That’s a big love of mine, to really figure out where did this person come from, what brought them to where they are now, and where, possibly, are they going in the future.” Always coming into play during the research process are mood boards and sketches, which illustrate both the macro and the micro—the overarching vision for a series, as well as the style of each individual character.

Working in film and television since the early 1980s, Ohanneson’s passion for costumes came to her very early in life. “I watched a lot of vintage movies with my dad, particularly Fred Astaire and Ginger Rogers,” she says. “Those were a huge influence on me.”

To this day, the designer feels that she has the best job in the world. “I’m a grown woman who’s still getting to play with live Barbie dolls,” she laughs. “You know, I have the handsomest Ken and the most beautiful Barbie, but they’re real life, and I get to do so many different characters. To be able to help tell the story, emotionally and physically, by what people are wearing, is just my favorite thing.”

Starring Joel Kinnaman, Michael Dorman, Wrenn Schmidt, Sarah Jones, Shantel VanSanten and Jodi Balfour, For All Mankind was renewed for a second season ahead of its November debut.

For more from our conversation with the sci-fi drama’s costume designer, click on the video above.