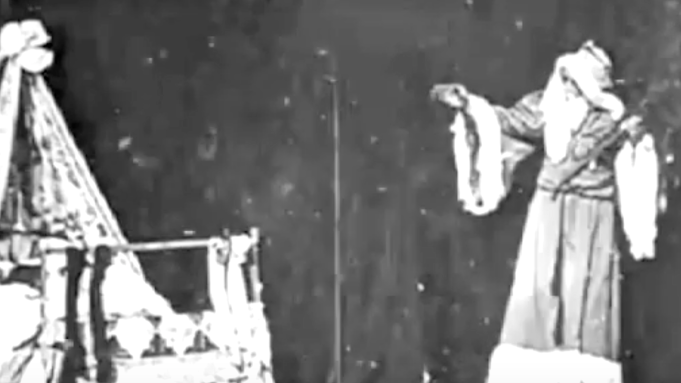 Who is the most-enduring character in screen history? Well, to quote the old holiday song: “It must be Santa, Santa Claus…” Yes, the right jolly old elf has the longest history of any screen character. It was 121 years ago that early U.K. filmmaker George Albert Smith gave the world the short film Santa Claus (in the video above) and the world’s first Christmas film. The flickering 1898 artifact has a somewhat eerie aura to it now but it includes plenty of attributes of Santa lore that remain recognizable today.

The bearded, hooded Santa is depicted on the rooftop of a home with a decorated Christmas tree in tow. (Both the tree and Santa are a bit on the scrawny side compared to contemporary standards.) Down the chimney and into the nursery, Santa leaves stocking stuffers, blows a kiss, and gives the snoozing tykes a blessing before vanishing with a wave.

The visual effects may not compare to Star Wars: The Rise of Skywalker but Smith’s Santa Claus was state-of-the-art when it was finished in September of 1898. The short was one of the very first moving pictures to incorporate “parallel action,” for instance, allowing viewers to see the rooftop action and the nursery scene sharing the screen at same time.

The venerable screen presence of Santa Claus is rivaled by the persistent popularity of Sherlock Holmes, who was introduced to the screen way back in 1900 in Sherlock Holmes Baffled. The unflattering title made for a humble start to the sleuth’s stellar screen career as did the plot-challenged adventure which was a half-minute long and produced for the Motoscope, a crank-operated, single-viewer “peep show” contraption of the era.