Continue to Deadline SKIP AD
You will be redirected back to your article in seconds
Skip to main content
April 27, 2019 8:00am 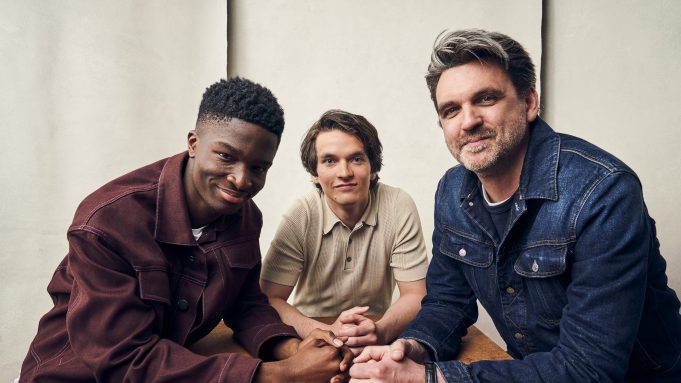 After making Victoria—a thriller shot in a single continuous take—Sebastian Schipper gave himself a new challenge, conquering the road movie with the aptly titled Roads.

Starring Fionn Whitehead (Dunkirk) and Stéphane Bak (Elle), the Tribeca pic centers on two teenage boys, from Congo and Britain, who meet in Morocco. Stealing an RV, the pair make their way to France, encountering poverty and refugees along the way.

Shooting in Morocco, Spain and France, Schipper’s pic was inspired bya “crazy, beautiful, meaningful”experience he had, while coming of age, traveling one summer with a friend. “I was thinking about doing a travel movie that captures all that’s beautiful about that—traveling together, meeting somebody. But I knew I couldn’t just make that as an escape from everything,” the director told Deadline in studio, sitting down with his stars. “I wanted this to take place in the world of today, with the problems and the darkness, and the harsh situations some people are in.”

To Whitehead, Schipper’s script (co-written with Oliver Ziegenbalg) was one of refreshing honesty. “It’s not often that I read a script and I find the emotion behind it very simple, in its honesty,” the actor shared.

For Bak, a self-professed fan of Kanye West, the draw to the project was something entirely different. “I remember that when I received the script, on the first page, Sebastian had a quote of Kanye West [from] ‘Ultralight Beam,’” he recalled. “I was like, ‘I’ve got to get this movie.’”

While the project took its team to some beautiful locations, the nature of the road movie proved challenging for all involved. “To be honest, it kind of takes a bite out of you, even though it’s a lot of fun. Because it’s crazy what happens to you if you’re always in a different place, in a different culture,” Schipper noted.

Combatting exhaustion while on the road, the helmer and his leads benefitted from the “nomadic tribe” that formed amongst the crew. “We were like 18, 20 people, and it’s really great if you have this tribe around you wherever you go,” Schipper added. “You kind of feel like you’re settling in, and setting up camp.”

To view our conversation with the director and stars of Roads, take a look above.