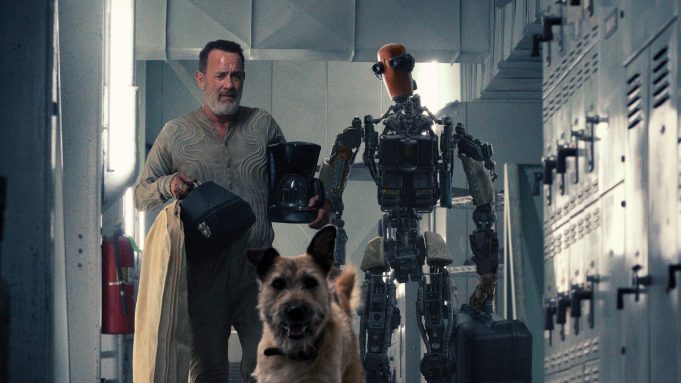 “It all happened so fast,” Tom Hanks laments in the first official trailer for Finch, released today by Apple. “There was a solar flare. Goodbye crops and food, goodbye everything.”

While the Oscar winner’s robotics engineer of the same name notes that he was left “frightened and so alone,” following a cataclysmic solar event that wiped out most of the world, it turns out that he’s found his salvation in a pair of unlikely friends.

In the film helmed by Miguel Sapochnik (Game of Thrones, True Detective), he shares his underground bunker with his beloved dog, Goodyear. Also living with him is a robot (played by SAG Award winner Caleb Landry Jones) that he’s built to watch over his pet when he no longer can.

When a storm hits, the trip must embark on a road trip into a desolate American West, and while on this journey, Finch looks to show his creation — who has named himself Jeff — the joy and wonder that come with being alive.

“We should be safe once we get into the mountains,” Finch tells his companions in the trailer. “[But] bad things will happen, like 150-degree heat, UV radiation—and people, hiding in the shadows.”

“Do you think we’ll make it?”, asks Jeff, to which the engineer responds, “Not without my team. What we do, we do together.”

Finch will debut globally on Apple TV+ on November 5. Ivor Powell and Craig Luck penned its script—the latter, in his feature-film writing debut.

Finch is an Imagemovers and Misher Films production presented by Amblin Entertainment and Reliance Entertainment, in association with Walden Media—and one of a number of anticipated releases from Apple. Its slate also includes Antoine Fuqua’s Emancipation, starring Will Smith; Martin Scorsese’s Killers of the Flower Moon, starring Leonardo DiCaprio and Robert De Niro; Swan Song, starring Mahershala Ali and Naomi Harris; Joel Coen’s The Tragedy of Macbeth, starring Denzel Washington and Frances McDormand, which was produced in partnership with A24; and recently released Sundance prize winner CODA, among other major titles.

Check out the first trailer for the streamer’s latest above.