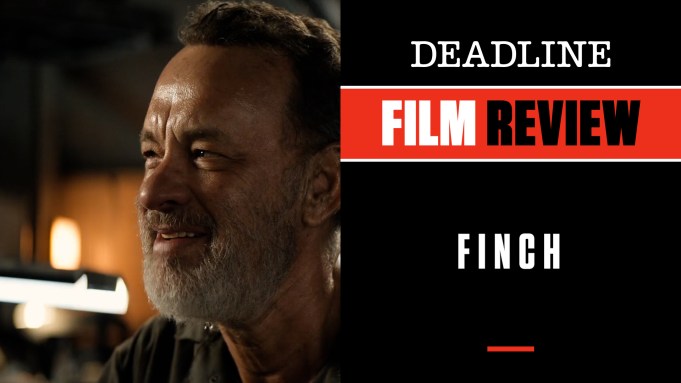 Tom Hanks must feel solitude is good luck. The two-time Oscar winner won another nomination for 2000’s Castaway in which he spent most of his screen time stranded on an island talking to a weathered volleyball named Wilson. Can the new movie Finch do the same thing for him?

Hanks is, as often the case, is perfectly cast and delivers a heartfelt and rich performance playing the title character, who by all appearances seems to be the only human being left on Earth. At least that is what seems to be the case as he has been spending a decade in a bunker in the middle of nowhere with only a faithful companion, a dog named Goodyear, as company. It is the post-apocalypse after some sort of solar disaster has wiped everyone off the map but he, a former robotics engineer, has managed to craftily survive, and as we meet him he drives into a deserted town nearby to scrounge for any supplies not already completely looted long ago.

However, Finch knows his days are numbered: As his increasingly alarming medical episodes indicate, the radioactivity is about to finally overcome him. His main goal turns to creating a robot, or AI droid, out of scraps. Think Wall-E for inspiration. This is so he can invent a companion to take care of Goodyear after he is gone, especially since there are no humans left to tend to his beloved dog. It is a truly beautiful bonding here between man and canine. Think Will Smith and Sam the dog in I Am Legend, or even Hanks’ own Turner and Hooch. You can even throw in the light touch of Short Circuit’s lovable robot Number 5 as Finch keeps refining the android he names Jeff, who slowly develops almost human intellect and speech.

After Jeff detects a disastrous 40-day storm on the way, this trio embark in a solar-powered RV on a road trip to San Francisco to see if they can find any trace of the human race on the Golden Gate bridge. Along the way, Jeff learns about what is important in life, love and responsibility. Can he become the answer to Finch’s quest to take care of Goodyear? That is the journey we all take with Finch, Jeff and Goodyear (played irresistibly by Seamus), and it is a memorable one indeed.

Apparently, actor Caleb Landry Jones, who is the voice of Jeff, also was on set the whole time opposite Hanks, with CGI later inserted. Whatever tricks they used in pulling off this teaming, it is enormously effective and really works. Of course it helps to have Hanks as your protagonist, and the actor slips into this role effortlessly, hitting a high point in a riveting monologue where he describes to the quizzical android exactly how he came to befriend and adopt a shivering pup named Goodyear after catastrophe hit the Earth. It just reminds you how Hanks can make great acting look so natural and easy. Jones matches him in a three-dimensional portrayal of this man-made robot.

Emmy-winning director Miguel Sapochnik (Game of Thrones) and screenwriters Craig Luck and Ivon Powell manage to keep the humanity front and center in this story that sneaks up on you until you are in its grip. There is just something about Finch that sticks with you. It’s special even if the movie itself seems to have been put together with scraps of earlier films, in some ways just like Jeff is created by Finch. In the end it feels like a true original no matter the familiar tropes of the genre.

The big mystery behind Finch is how it somehow escaped theaters entirely and is going exclusively to streaming on Apple TV+ beginning Friday. It is the kind of film that could really generate word of mouth and become a moviegoing boost, an original that makes heading out to a theater special again. Unfortunately, it will have to find that audience via streaming. The draw of Hanks, just as he was for Apple with the World War II flick Greyhound that they inherited from Sony last year, is the secret sauce that should make this a destination. Apple has something that will have great appeal for families across the board, so here is hoping it gives it the tender loving care it deserves.

Heavyweights are behind the movie, with Robert Zemeckis counted among its executive producers and his ImageMovers among the production companies. Include Steven Spielberg’s Amblin Partners in the mix as well. Producers are Kevin Misher, Jack Rapke, Jacqueline Levine and Powell.

Check out my video review above with scenes from the film. Do you plan to see Finch? Let us know what you think.