Continue to Deadline SKIP AD
You will be redirected back to your article in seconds
Skip to main content
June 14, 2019 8:00am 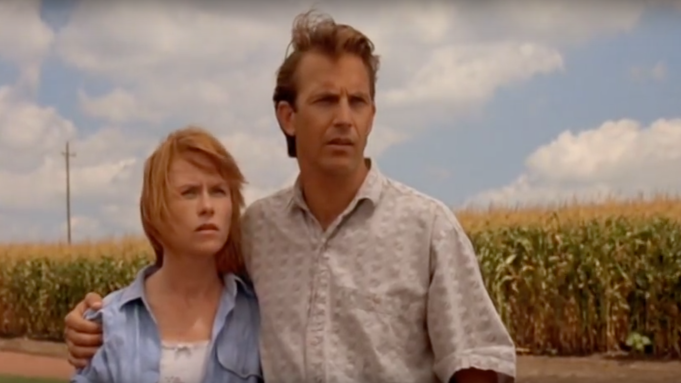 Contemporary adult drama with fantasy elements can be a tricky combination (especially when Christmas themes or supernatural menaces aren’t involved) but when done correctly the resonating results can be magical. Thirty years ago, that was the case with Field of Dreams, a poignant crowdpleaser about fathers and sons told in the rhythms of baseball and second chances.

The Universal Pictures release is headed back to theaters for Father’s Day with a special two-date engagement (June 16th and June 18th) through Fathom Events and the TCM Big Screen Classics Series. More than 600 theaters will be screening the film that starred Kevin Costner, James Earl Jones, Burt Lancaster, Amy Madigan, Timothy Busfield, Dwier Brown, and Ray Liotta as the ghost of “Shoeless” Joe Jackson.

Produced by Lawrence and Charles Gordon, Field of Dreams was based on Shoeless Joe Jackson, the 1982 novel written by Canadian author W.P. Kinsella with a yearning magical realism that fit the story’s baseball lore like a glove. Field of Dreams would be nominated for three Academy Awards, including best picture and a best adapted screenplay nod for writer-director Phil Alden Robinson.

It was Robinson’s screenplay that had coaxed Costner to commit to back-to-back baseball movies (he was coming off of Bull Durham) a career move deemed so unlikely that the Field of Dreams producers were reluctant to even approach the actor with the pitch. Luckily, they swung for the fence instead.

“Field of Dreams,” Costner would later say, “is probably our generation’s It’s A Wonderful Life.” The Library of Congress agreed that the yearning fantasy film was a movie for the ages: Field of Dreams was selected two years ago for inclusion and preservation in the United States National Film Registry. To revisit the story of an Iowa cornfield that became a cinematic homerun, Deadline caught up with writer-director Phil Alden Robinson (Sneakers, The Sum of All Fears) to discuss his signature film and its 30th anniversary.

DEADLINE: There’s not many adult-themed dramas that incorporate magical realism as smoothly or as seamlessly as Field of Dreams. There’s some like The Swimmer, The Curious Case of Benjamin Button, or, coming soon, Yesterday, but many more seem to lean into comedy, like Midnight in Paris, Heaven Can Wait, Groundhog Day, or All of Me, another 1980s film you wrote. Were there any movies you looked to as a north star as far as tone or approach?

PHIL ALDEN ROBINSON: My north star was solely Shoeless Joe, the novel by W.P. Kinsella. I had it propped open on the desk beside me as I wrote. This led to a first draft that was so overly faithful to the book that Scott Rudin’s note was “Congratulations, you’ve just written W.P. Kinsella’s first draft. Now write your own.” Best advice I ever got. That’s when I learned that the truest way to adapt a book is to ask yourself what you loved about it, then write a screenplay about that. Use all the raw materials from the book you like, but in the end your primary allegiance must be to the movie, not the book.

DEADLINE: How did that go over with the author of the source material?

ROBINSON: It was with great trepidation that I wrote Kinsella a rambling and apologetic letter explaining all the changes I reluctantly was going to make, and how badly I felt about changing his creation. Weeks passed without a reply, and I imagined him wanting me dead. Then a postcard arrived from Hawaii, where he’d been vacationing. It read “Dear Phil, Do whatever you have to to make it a movie. Love, Bill.” Best postcard I ever got.

DEADLINE: Did the project appeal to you because of the fantasy elements or despite them?

ROBINSON: I’m not normally drawn to magical elements, but this book maneuvered around my defenses page after page. On page one, Ray hears the voice. Once. On page two he tells his wife he has to plow under the corn and build a baseball field so “Shoeless” Joe Jackson can come back and play again, and she lovingly agrees. I fell head-over-heels for this book right there. I’d never read characters like that, and yet they were firmly grounded in the real world. Interestingly, when I faithfully recreated that in the screenplay, it felt jarringly unreal. Characters existing only in a reader’s imagination can somehow get away with things that characters portrayed by actual humans filmed in living color cannot. So I gave Ray some resistance – he assumes there must be a real-world explanation for the voice; he has to hear the voice a few more times; finally, he has to see an actual vision before he succumbs to it. I even had a scene in which he goes to an ear doctor to have his hearing checked. Kinsella read that draft, understood why we delayed Ray’s acceptance, but said we had one too many scenes of doubt. We tested the film, and he was absolutely right. I cut the ear doctor.

DEADLINE: Field of Dreams was the last feature film for Burt Lancaster, capping a legendary silver-screen career that spanned five different decades.  Can you share a snapshot memory of working with him?

ROBINSON: Given Doc Graham’s mythical status in his hometown, I wanted a genuine movie star from an earlier generation to play him. Someone whose stature would balance nicely with Kevin’s current stardom. But Burt was not in good health that summer. One of his first scenes was in his office, relating his dream of just once facing a big-league pitcher. The set was hot, it was late, he was tired, the lines were long, and he struggled with them. It was a two-and-a-half minute take, and we did nine of them. The first was pretty good, but it was as if it had taken all the effort he had. Takes two through eight were marked “n.g.”, or “incomplete.”  I was despairing of ever getting it the way I’d hoped, but on the ninth take, he summoned the magic from who-knows-where, and he was perfect. That voice, those eyes, his gestures, humor, pain and intelligence, it was all there. I watched from the left side of the camera, and I swear it was like an hallucination. I did not see the boom mic over his head, the lights and flags just out of frame, the crew hovering around. I saw only a close-up of a movie star on a large screen, mesmerizing an audience. It’s the only time I’ve ever experienced that on a set.

DEADLINE: The reactions of the characters to the events they are encountering are wonderfully authentic. Was it a challenge to tread the line with that? If the characters are too disbelieving, I imagine, it might seem like they’re skeptical of the film itself…

ROBINSON: The first part of the solution was to have the characters acknowledge – for the audience – that “I know this is crazy, but …” We did that a few times, because the important thing was not for the audience to believe in the magic – at least not initially – but only to believe that Ray and Annie genuinely did. The second part of the solution was to cast great actors. What Kevin and Amy pulled off was not easy, though it looks like they did it effortlessly. But I promise they worked very hard to make it look like that. It took a lot of talent, experience and smarts, and without them it just would not have worked.

DEADLINE: It’s a movie that means an awful lot to an awful lot of people. Especially fathers and sons. What are some of the interesting or surprising ways that’s come across to you over the years?

ROBINSON: At first, we received a lot of mail from men who wrote variations of “I haven’t spoken to my father in twenty years, but after I saw this movie I called him up and said ‘Let’s have a catch’.” That was lovely, very gratifying, and perhaps to a small extent, expectable, given the plot. But the reaction I will never forget was from an elderly Vietnamese lady after we screened the film in Hanoi in 2007. She stood up in front of the audience during the Q&A, and said she never knew that American people cared about family the way Vietnamese people do. She said it had changed her entire view of American people. I cherish that one.

DEADLINE: I’m not sure there’s been any sports movie that showed less concern or attention to the score of a game. But there is something existential about baseball that makes it perfect for this tale. It’s difficult to imagine this story playing out over any other sport. I’m curious, do you still find baseball magical? What was the last game you attended?

ROBINSON: I’m sure that someone else could tell this kind of story with a different sport, but I couldn’t, and that’s because of the magical hold baseball still exerts on my psyche. I think it’s beautiful, timeless, perfect. All of which probably has to do with not the last game I saw, but the first one. It was at Ebbets Field on April 9, 1955.

Below, an April 1955 photograph of Phil Alden Robinson, right, a month after his fifth birthday, attending a Brooklyn Dodgers exhibition game against the New York Yankees at Ebbets Field with his father, S. Jesse Robinson.