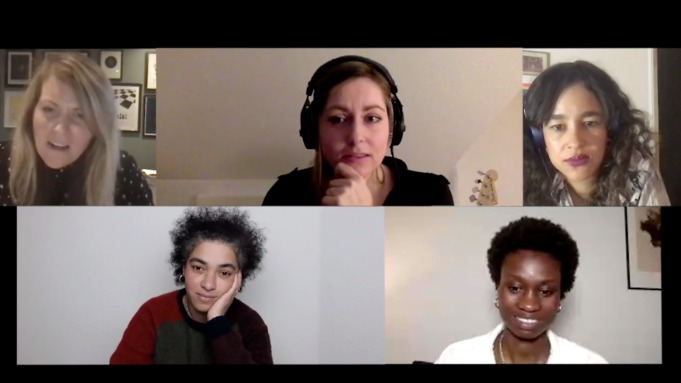 We were joined by actor Lorna Ishema, director Sarah Blaßkiewitz, costume designer Ulé Barcelos and composer Freya Arde who all gave insight into their work, the lay of the land for women working in the German entertainment industry and the challenges they faced progressing their work in the midst of a global pandemic.

Ugandan-born actor Ishema, who stars in ZDF’s drama series Breaking Even and Blaßkiewitz’s directorial debut Precious Ivie, notes that while women are being offered more leading roles than in previous years, diversity on-screen still remains an issue. “Most of the parts are played by white women, non-queer and abled-people…[but] I would like to see also different perspectives.”

She highlighted the importance for the industry to encourage more females and diversity behind the camera. “I see there is a lot more openness for that, which wasn’t there a few years ago,” she said.

Composer Arde, who won a German Film Music Award for her work on Nelly’s Adventure and recently worked on Constantin’s nature documentary The Hidden Life Of Trees, which attracted nearly 350,000 German cinemagoers to the theaters before Covid hit, said her field is largely male-dominated. “It’s still not the norm for people to read names of women in the music credits…especially not in the big budget projects.”

Arde pointed to a feeling that women composers still have to work harder to get a foot in the door on a production, compared to her male counterparts. This, she believes, is down to comfort rather than ability. “We have the knowledge about music, we have the creativity, we can compose – this is not the question,” she said, noting that sometimes productions choose who they feel “safe” to work with, which has historically been white men in the field.

Blaßkiewitz, who just finished shooting her directorial debut Precious Ivie, which was quite a feat in the middle of a pandemic, was charged by the desire to make “a politically relevant film in Germany.” Inspired by her family and friendships, the story is about two Afro-German half-sisters (played by Haley Jones and Ishema) who have never met before but form a bond after discovering their father has died in Africa. It’s an exploration of whether blood is thicker than water, Blaßkiewitz says, adding that “both sisters have to struggle a lot to find themselves on the journey of identity.”

Costume designer Barcelos, whose bold and colorful work was seen in 2020 German Oscar entry System Crasher, cites that although the pandemic has been a major upheaval for the entire industry and has changed everyday life on set, the sector is lucky that it can still make content. “I’m glad we can still work,” she said. “We can still shoot content and movies…there are a lot of other people that are not [working] like artists, theatres and musicians.”

Check out our footage from the event above.