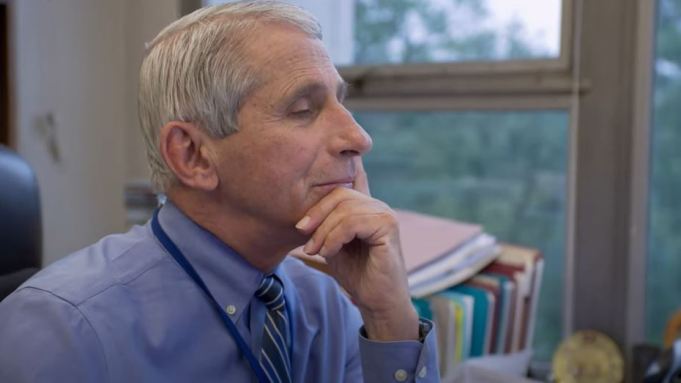 EXCLUSIVE: You probably can guess what National Geographic’s new documentary Fauci is about. And you would be right. The film, which will be going into theatrical release September 10 in select cities (specifically only those with appropriate mandates and guidelines for theaters), and then debuts in October on Disney+, is a portrait of Dr. Anthony Fauci, the public servant, scientist, physician, husband and father whose career spans seven presidents and is bookended by two pandemics: HIV/AIDS, which shaped him, and of course Covid-19, the latter bringing him countless TV appearances in American homes on an almost daily basis over the course of nearly two years.

The film is directed by Emmy winners John Hoffman (The Weight of the Nation) and Janet Tobias (No Place On Earth), and executive produced by Oscar winner Dan Cogan (Icarus) and Oscar nominee Liz Garbus (What Happened, Miss Simone?, The Farm: Angola U.S.A.). The filmmakers emphasize that Fauci had no creative control, was not paid for his participation, and has no financial interest in the movie. Having seen it I can say it is an enormously impressive and effective look at a man consumed by the profession of medicine and looking out for what he sees as the greater good of people. Of course, in some quarters the politicizing of the pandemic has put him in the cross-hairs of controversy and turned him into something of a polarizing figure, but this is a man with a remarkable career on a lifelong mission for humanity and that, above all else, comes across clearly and poignantly in Fauci.

In a recent conversation, Carolyn Bernstein, EVP Global Scripted Content and Documentary Films for National Geographic, told me about the challenges of getting this documentary made at this unique time.

“We had some obviously serious restrictions when we were shooting the movie because we shot it during Covid,” she said. “It wasn’t until the very end of shooting, when everyone was vaccinated, that we could get into his house, but we did get into his offices at the National Institutes of Health and spent a lot of time with him, but you know, circumscribed to follow the rules because he is the nation’s top doctor. So, we had to be very careful about that, but it’s obviously authorized and incredibly cooperative.

“He was very, very sensitive when we were shooting to the fact that he did not want Donald Trump to find out about this movie. So, there was a very tight circle of people who knew about the movie because he felt that if Trump found out, (the former President’s) ego would not be able to process it, you know, and it was right in the midst of him having a lot of difficult political battles with Trump.”

Bernstein emphasized, however, that the movie is not political in any way. “We acknowledge the partisan nature of the world and how Fauci became a very polarizing figure, but it’s really about, as with [the Ruth Bader Ginsberg documentary] RBG, the selfless life of a dedicated public servant, and the sacrifices that you make.”

Check out the trailer at the link above and the poster below.