How The Pieces Fit In CAA's Acquisition Of ICM Partners
Read the full story
November 9, 2020 10:41am
10Comments 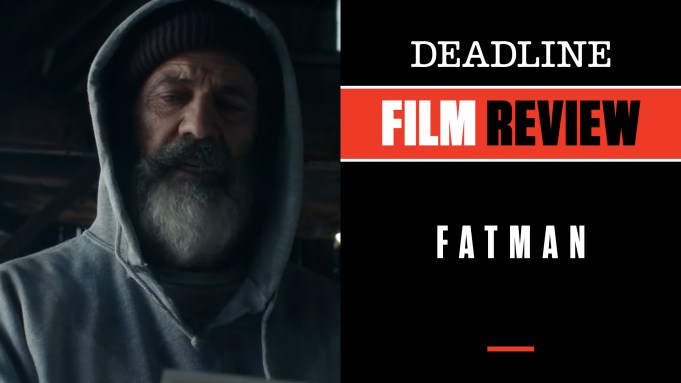 “A superhero film wrapped in a thriller dipped in western and sprinkled with satire” — that’s how writer-directors the Nelms Bros describe their new holiday fantasy action film Fatman. Mel Gibson holds the reins on the sleigh as Chris Cringle/Santa Claus — an ordinary-looking guy who drives a red truck around his rural Alaska town — and though he appears nothing like any version of Santa we’ve ever seen, the story they have dreamed up would have us believe he and his wife Ruth Cringle (Marianne Jean-Baptiste) have been at this for hundreds of years.

Turns out, in a sign of the times, Santa is in deep financial doo-doo. His government subsidy to keep his Christmas gig alive is in the dumps, and he is forced to make a short-term deal with the U.S. military, which needs his elves and operation for their own purposes. Meanwhile, things are so dire that some children are getting coal in their stockings for presents.

One of those kids is a precocious Richie Rich-type named Billy Wenan (Chance Hurstfield), who is ignored by his absent dad, lives with his sickly grandmother and doted on by nannies and maids in his vast mansion. Spoiled doesn’t begin to describe this kid, and when he gets insulted by Santa’s gift, he screams to the heavens (he really does) and vows revenge, hiring a hitman known only as Skinny Man (Walton Goggins) to track down and kill Santa.

Turns out Skinny Man also has his own reasons going back to his miserable childhood that gives him further impetus to be successful in this. He is accompanied in his quest by his pet Russian dwarf hamster named Stanley. Yes, indeed. And so the bulk of the rest of the film deals with his efforts to find Cringle, Cringle’s efforts to stay in business and — in pure Mel Gibson fashion — outsmart the guy when push comes to shoves. Despite the out-there premise, this is all pretty standard action-movie stuff the way it plays out, none of it with much credibility or the social significance it thinks it has.

Yes, the plight of these characters somewhat mirrors the hard times we are going through, but the actors, including Gibson, must be wondering what they are doing in this except getting a paycheck and giving it a little gravitas by their presence. The Nelms Bros, Eshom and Ian, who clearly have a knack for pulling off some of these action scenes, keep it all moving along at a nice pace. Production values are quite good in a modestly budgeted film that benefits from a name cast leading it. The filmmakers have been trying to make this in one form or another for 14 years, so now some of its social concerns actually have more relevance than had they gotten it shot when they first came up with it, but it mostly adds up to pretty silly, if harmless, stuff.

Gibson plays it all in a lower-key manner than we have seen him do much onscreen, and that approach helps us digest that this un-Santa Santa is the real thing. His best bit is when he shows off Donner and Blitzen to some government officials. Jean-Baptiste, an Oscar nominee in 1996 for Secrets and Lies, perfectly complements him and comes off nicely here. Goggins tries to keep a straight face and plays the heavy with earnestness. Hurstfield does what he needs to do in playing a kid who always gets his way and resembles what Donald Trump must have been like at that age.

Nadine De Barros, Todd Courtney, Lisa Wolofsky, Michelle Lang and Robert Menzies are producers for the Saban Films production, which hits theaters on Friday, and then November 24th  on VOD and digital platforms. Check out my video review with scenes from the film at the link above.

Do you plan to see Fatman? Let us know what you think.