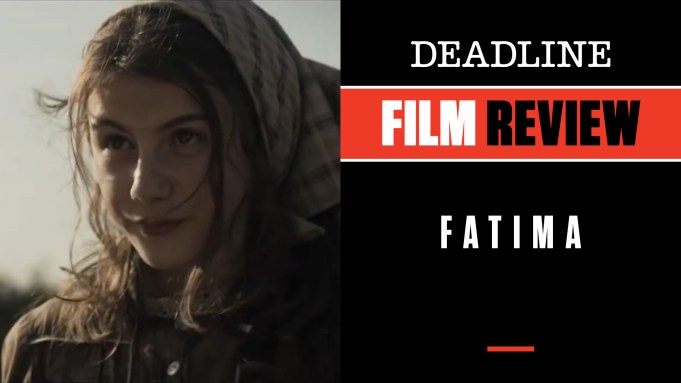 Faith-based films, as they now are known, have been a staple of the movie industry almost from the moment it began. But the movement toward more contemporary stories of faith differs from Hollywood’s past infatuation with religion and period movies from The Song of Bernadette to The Ten Commandments to The Story of Ruth to a blockbuster like The Passion of the Christ.

The new film Fatima has its roots in those kinds of movies and, in fact, is something of a remake of the 1952 Warner Bros film The Miracle of Our Lady of Fatima. The producers actually got rights to it before embarking on a new telling of the classic true story of three children in Fatima, Portugal, in 1917 who conversed with what they say is the Virgin Mary, an apparition regarded indeed as a miracle by many who flocked to the small town to experience it themselves.

Director Marco Pontecorvo, son of legendary Italian director Gillo Pontecorvo (1966’s The Battle of Algiers), and with his co-screenwriters Valeria D’Annunzio and Barbara Nicolosi have found a new way in that not only should find contemporary audiences getting new understanding into the century-old event but also is remarkably prescient in timing that is eerily close to that moment in at least one very significant way. The film relates what happens when 10-year-old Lucia (Stephanie Gil) and her two younger cousins Jacinta (Alejandra Howard) and Francisco (Jorge Lamelas) discover an “apparition” they believe to be the Virgin Mary (Joana Ribeiro). They begin a dialogue with her once a month for six months in which she teaches them that the only way to end the horrors of World War I is through the power of prayer and suffering.

This comes about after Lucia initially has a visit from an apparition of an angel who facilitates her own vision of her older brother Manuel (Joao Arrais) caught in an explosion on the front lines. The truths the children tell their elders about all this quickly is dispelled, not only by Lucia’s mother Maria (Lucia Moniz), who can’t fathom that the Virgin Mary would choose her daughter for such an encounter, but also the Mayor (Goran Visnjic), who — under pressure from government — even tries to jail the kids to force a confession that they are lying. A priest, Father Ferreira (Joaquin de Almeida), is determined to get to the bottom of it as the highest rung of power, and the Catholic Church itself, lays down the gauntlet. However, word-of-mouth takes hold, and the town soon is swarmed by pilgrims drawn to the idea that a true spiritual awakening is upon them.

The film differs from the 1952 version in the bookending and frequent scenes set in the present, where a skeptical author, Professor Nichols (Harvey Keitel), attempts to learn what really happened by tracking down the older Lucia (Sonia Braga), now an 80-year-old nun in a convent in a town in Portugal. Their dialogue is fascinating and draws the line between those who choose to believe and those who put up resistance. It is a device that allows the audience to participate in all the questioning in a way that works quite nicely here and doesn’t distract in the least from the main story the filmmakers want to tell.

That Pontecorvo avoids flash and a clichéd approach to the material is welcome, and the film is blessed, as it were, to have such convincing young actors at its center. Gil (Terminator: Dark Fate) is especially well cast because, if we don’t believe her, the whole soufflé falls. It doesn’t. All the actors, though, make this simple tale of faith, prayer and belief in a miracle work on a very visceral level. And it is great to have pros like Keitel and Braga on board as well.

Shot in Portugal, the locations and production value emphasize authenticity, and the period setting is well conceived. Andrea Bocelli offers a couple of songs on the soundtrack, including one from the composer Paulo Buonvino, that are perfectly in tune with the spirit of this lovely film that is not recommended for cynics. In real life, though, the Lucia character lived but her two young cousins were felled by the great pandemic of 1918 the very next year. That the film, originally to have been released in theaters in April, also was nearly done in by a pandemic 100 years later is an irony not lost.

But like the miracle of Fatima, the film perseveres and finally opens in theaters and on VOD this Friday through Picturehouse; distributor Bob Berney also was a key force in the successful launch and run of The Passion of the Christ, so he knows the territory for this kind of film. Producers are Pontecorvo, Stefano Buono, and Maribel Lopera Sierra. Check out my video review with scenes from the film at the link above.

Do you plan to see Fatima? Let us know what you think.