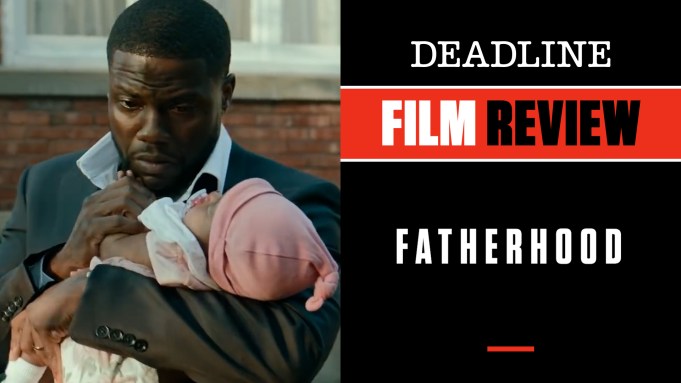 If you look at all of Kevin Hart’s credits on IMDb, you would be hard-pressed to find much of anything that shows off his skills as a dramatic actor. Maybe The Upside opposite Bryan Cranston would give us a clue mixed in with the broader comedy, but finally he has found some material that really shows he has talent beyond those impressive comic skills that made him a superstar and box office success.

Perhaps because his latest film, Fatherhood, delivers not exactly what audiences expect of Hart, Sony has chosen not to go the theatrical route and instead the film has moved to Netflix, where it begins streaming Friday, just in time for Father’s Day weekend.

As a surprisingly moving family story, based on the blog and then book by Matt Logelin that chronicled his life as a single parent to a newborn girl after his wife dies unexpectedly shortly after giving birth, Fatherhood employs all of Hart’s considerable skills — yes even some laughs — in which he credibly goes through all the pain and glory of becoming a dad in a way he certainly was not prepared for.

As Logelin, who is white, Hart also proves the value of colorblind casting as the fact that he and other family members are African American is not an issue at all and in fact just enhances the universality of what Logelin encountered when Maddy (the older version played by Melody Hurd) comes into his life. A joyous birth scene turns tragic when he must return home alone with a baby his wife Liz (Deborah Ayorinde) has delivered but never got to take home herself. The film, ably directed by Paul Weitz (who co-write it with Dana Stevens), then doesn’t break new ground in showing the travails and budding father/daughter relationship as well as the conflicts with his in-laws (nicely played by Alfre Woodard and Frankie R. Faison) who think they might have Maddy’s best interests in mind over the objections of Matt. However it is clear that even with a busy corporate job that involves a lot of traveling, Matt is bound and determined to make this fatherhood thing work. We see his relationships with his boss (Paul Reiser), best buddies Lil Rel Howery and Anthony Carrigan (who also is a co-worker) and a new love interest with a woman coincidentally also named Liz (a warm DeWanda Wise). But above it all is his love for Maddy and his complex role as dad to Maddy, and both Hart and Hurd play it beautifully as she grows older and, yes, more demanding.

Ultimately Fatherhood demonstrates it is not all that easy being a parent, even in the best of circumstances, and those that Matt Logelin must navigate are not exactly ideal. Hart. however, is ideal here, and he was wise to jump to the prospect of playing Logelin, warts and all. With Netflix’s global reach, he should collect a whole lot of new fans. Check out my video review with scenes from the film at the link above. Hart is also producer along with Marty Bowen, David Beaubaire, and Peter Kiernan.

Do you plan to see Fatherhood? Let us know what you think.