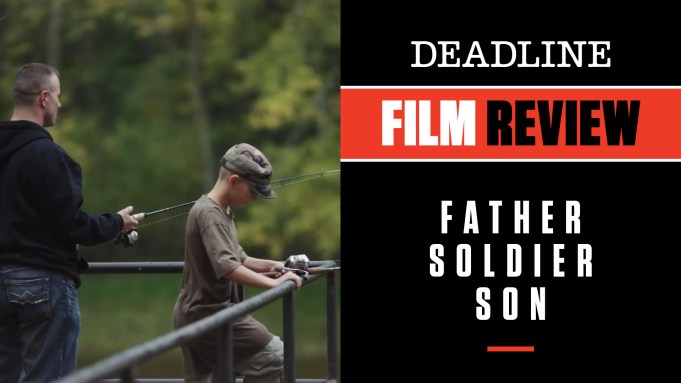 Richard Linklater’s Boyhood was shot over the course of 12 years and chronicled the life of an American family in that time. The new Netflix original documentary Father Soldier Son does the same thing in the span of 10 years of shooting, but with one major difference: Boyhood was fictional, with actors. This one is real life. Both are brilliant and compelling feats of filmmaking, and each memorable in their own way.

Father Soldier Son comes from the New York Times’ filmmaking division and reporters-directors Leslye Davis and Catrin Einhorn, who originally embarked on a very different idea, to follow a military battalion’s yearlong deployment to central Asia and Afghanistan as they fight the Taliban. It evolved into much more, and much more ambitious and personal, as it wound up carrying the assignment beyond that time frame and zeroes in on Sgt. 1st Class Brian Eisch and his two young sons, Isaac, age 12 when we meet him, and the live-wire Joey, age 7. Eisch’s deployment turned nightmarish when he was shot in the leg and brought home after two months to deal with the aftermath of that injury, which sadly eventually resulted in an amputation.

During the time Eisch was overseas, his sons were sent to live with an uncle; their mother had lost custody and had no contact with them for two and a half years after that. We see frequent sequences with them describing their ordeal and views on everything happening in their lives from the more introspective Isaac to more outgoing Joey, who wants to track down those who caused his dad’s injuries. Once Brian is back home there is the focus on the progress with his leg, adjustment to life with a prosthetic, and being a single dad to two young boys. We also see the ongoing effect of a life in service to the country and its effect on the family.

Over the years we also see the introduction of a girlfriend Maria, with kids of her own, as well as the joyous remarriage for Brian and the arrival of a baby boy. Interspersed with that is an unflinching and surprising look at the stuff of life when a new tragedy strikes. As the film’s press notes so eloquently state, this is a story of “absence, reunion, rehabilitation, tragedy, and joy.”

Over the course of 10 years the filmmakers shot 300 hours of film, editing it down to 99 minutes in cinema verite style as we really feel like a fly on the wall watching the Eisch family and experiencing up close the extraordinary journey, unflinchingly emotional, moving and uplifting in all its pure honesty. There are moments you wonder at the resilience of the family agreeing to this kind of documentation of their lives even at the rawest moments — I almost had to turn away at one point but had to admire their decision and commitment to this film.

Certainly it also required a delicate dance by the directors, but one in the end that is uncompromisingly humane, and not as intrusive as it might have been. What emerges is the story of an American family told without apology and seemingly uncensored — at least that is the way it appears to an outsider. It also is first and foremost about the military’s effect on family, this one in particular, and what happens when the son follows the father’s path. As Brian says, believing Isaac will never make it to college, that if you do your job well in the service you will get promoted. Through Isaac’s eyes we see a young man not that sure, but for whom life is traveling a familiar path for this family. This is a film that is unforgettable in so many ways, one that eschews politics for the honest truth of these lives.

In addition to the directors, producers are Nancy Gauss, Kathleen Lingo and Kara Rozansky. Netflix begins streaming it on Friday.

Check out my video review above with clips from the film. Do you plan to see Father Soldier Son? Let us know what you think.