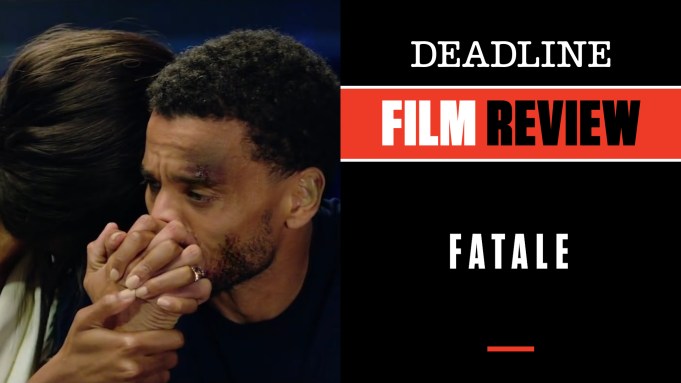 1987’s Fatal Attraction was a highly influential psycho-thriller, a smash box office sensation that also garnered six Oscar nominations including Best Picture. It has been endlessly copied ever since, as recently as this year with the gender-switch version in Fatal Affair and now with Lionsgate’s Fatale, a ludicrous but twistily entertaining new attempt to cash in on the love for that Michael Douglas and Glenn Close landmark of 33 years ago. Of course, even that film was not really new, since film noirs of the 1940s and ’50s often trafficked in similar storylines. Director Deon Taylor is making his own cottage industry with various iterations and diverse casts in such films as another recent entry, Intruder, which featured Michael Ealy, one of the leads of Fatale (Taylor’s prolific recent output includes well-regarded indies like Black & Blue and Traffik).

The title refers to Hilary Swank’s character, Val. Married successful sports agent Derrick (Ealy) meets her during a bachelor party weekend in Vegas, engages in a one-night stand after being urged on by BFF and business partner Rafe (Mike Colter), and then puts it behind him when he returns home to his wife Tracie (Demaris Lewis) and their plush, well-appointed home. He seems to have it all, despite simmering marital woes, until a masked intruder pulls off a home invasion and nearly kills Derrick.

Who in god’s name would do this to him? This is a question that bothers the police detective that comes to investigate, a decorated female officer named Val Quinlan. Whoops — could it be the same Val with whom Derrick slept in Vegas? You bet. And is she really manipulating this whole situation in order to cleverly stalk a guy by whom she will not be ignored? Actually that is what I thought at this point in the movie, thinking yet another variation on Fatal Attraction. Now let’s watch her go all nuts on the poor guy right? And in plain sight of his wife, especially when he comes home on another day to see her actually interviewing Tracie. Yesirree! Been there-seen that. Uh, but maybe not completely.

Taylor, who expertly keeps this thing paced within an inch of its life, and his screenwriter David Loughery (The Intruder) are seemingly more interested in piling on unexpected Double Indemnity-style detours to the plot, adding one twisty moment to another in building the mystery of what is really happening to Derrick. It is not as simple as a one-night stand careening out of control. In fact, there are so many left turns in this stew that it becomes ludicrous — probably the whole point to keep us engaged despite all credibility being thrown out the window. Turns out Val has her own backstory: estranged from her ex-husband (Danny Pino), who won complete custody of her kid, with whom Val wants to re-establish a relationship but has been ordered to stay away due to some very bad behavior. And why, with her own legal woes, does she manage to keep her job as a top detective? Is all of this an interwoven web she is weaving? Let’s stop here and avoid spoilers as to where it all leads. If you want to succumb to this story — and there is a good time to be had here — just be warned to check all semblance of logic at the door because the holes in this thing are pretty deep. However, for many of the ’80s and ’90s thrillers also inspired by Fatal Attraction, logic and credibility were not really the options selected in most cases either.

Fatale is pure escapist fun, taken on its own terms, and aided by a swing-for-the-fences turn from Swank who, again, after The Hunt where she went all evil, proves she can take a walk on the dark side with the best of ’em. Here she keeps us, as well as Derrick, craftily guessing as they engage in a cat-and-mouse game and revelations pile up. Ealy is ideally cast and has a strong screen presence, although you might find yourself yelling back at the screen to the hapless dude at certain points. Lewis, Colter and the rest of the supporting cast don’t offer much in the way of complexity but do what is required. The real star here is veteran Oscar-nominated cinematographer Dante Spinotti’s glossy camera work, illuminating an upper-middle-class world where the high-end cars and homes are scrubbed and sparkling to an extreme. This movie looks damn fine.

Check out my video review above with scenes from the film. Do you plan to see Fatale? Let us know what you think.