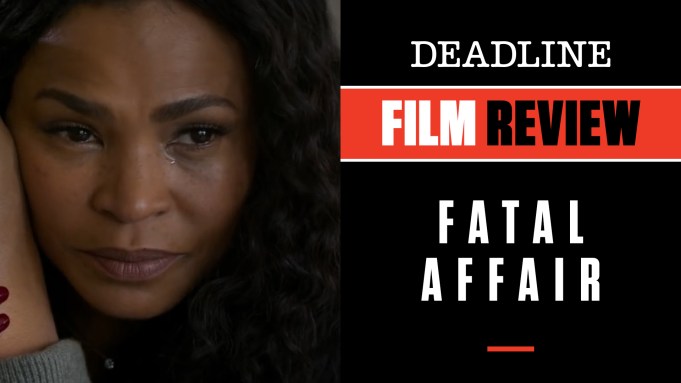 Sony’s low-budget arm, Screen Gems, often specialized in genre suspense thrillers, but lately it is Netflix that has jumped on the bandwagon to turn them out with generic titles like this week’s Fatal Affair. Despite the presence of the always-luminous Nia Long, this by-the- numbers entry follows the predictable formula for these things so closely it almost borders on parody, right down to writer-director Peter Sullivan’s not-so-subtle frequent shots of the knife holder in the perfectly appointed kitchen. Sullivan previously has dabbled in the genre with completely forgettable titles like Secret Obsession but his filmography is otherwise loaded with several variations on Christmas movies. Quentin Tarantino he is not.

Long plays Ellie, a successful lawyer with a college-age daughter (Aubrey Cleland) and a seemingly nice and supportive husband Marcus (Stephen Bishop). Despite an outward appearance of an upscale nice life — the beach house is gorgeous — she feels her marriage is in the doldrums, and after the case she is working on wraps up, she plans to open her own firm. But before that happens, an old friend, David (Omar Epps), pops into her life after 20 years when he lands a job with her current firm. Reconnecting, he quickly makes the moves on her that very night with drinks at a bar and admits their reunion wasn’t a coincidence since he knew Ellie worked there and purposely got himself hired because of that.

Her best friend Courtney (Maya Stojan) was scheduled to have drinks with her but had to work late, leaving David and Ellie on their own in a night that escalates as David lures her onto the dance floor and then into a restroom where a sexual act nearly occurs until she cuts him off. Clues are dropped to David’s past in a trip to the therapist, where we learn he has anger problems and clearly is delusional about Ellie. Sullivan turns up the heat on the “fatal affair” as David keeps finding ways to confront Ellie to seduce her, and she increasingly becomes freaked out by him, especially when he shows up at her house as the unannounced dinner date of — you guessed it – Courtney, who is completely unaware that Ellie and David know each other, a ruse that is maintained all through the dinner until she gets him to leave. His obvious mental problems ratchet up as not only Ellie but everyone else is in the danger zone as he pursues his goals.

The film opens with a murder, so we have an idea instantly where this all might wind up, and it’s no surprise that murder scene involves David’s ex-wife and her new boyfriend. Sullivan shamelessly telegraphs everything here, even with nearly identical home break-ins and close encounters in the kitchen, before a microwave goes off the first time or a phone rings the second time. A couple of McGuffins are tossed in, but the only viewers who will be surprised are those who have never seen one of these films before. It is all safely predictable and could have ended at the 20-minute mark, if only Ellie had called the cops in the first place or warned anyone about this psycho. That, of course, never happens in these things, and if there is a dark room to enter, our protagonist will walk right in.

Long is so good an actress that she almost singlehandedly makes this ludicrous plot credible. I said almost. Epps is decent in playing this creepy guy who definitely should have spent more time with that therapist. The others aren’t given much chance to develop their characters beyond one dimension. Certainly it is all handsomely mounted. The film is streaming now on Netflix.

Producers are Barry Barnhortz, Jeffrey Schenck, and Long. If you want to see the star in something worthy of her talents, hop over instead to Apple TV+ and check out a terrific movie called The Banker.

Do you plan to see Fatal Affair? Let us know what you think.