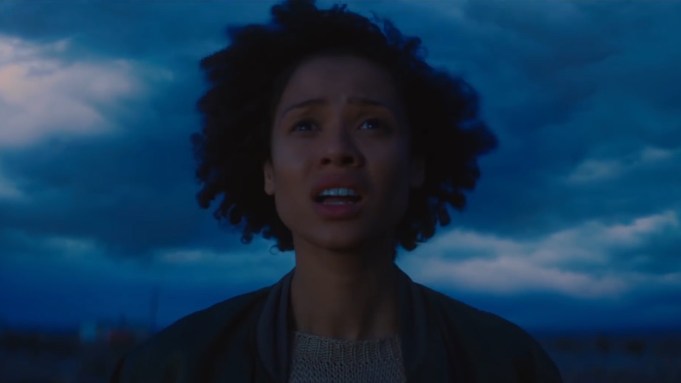 It is a very good time for female superheroes in the movies, and you can say it is about time. With the roaring success of Wonder Woman and Captain Marvel, I imagine we can expect many more, but a new indie film opening this week puts a completely different spin on the genre and becomes a rewarding, even inspiring film experience.

I shouldn’t be surprised because Fast Color comes from the husband-and-wife team of Julia Hart and Jordan Horowitz. Hart directed and co-wrote (with Horowitz) a small film I admired greatly called Miss Stevens in 2016 that featured a breakout role for then-unknown Timothée Chalamet. Horowitz famously produced La La Land and was the one who had to deliver the news that there was a “mistake” when the Best Picture envelope was opened in 2017. He and Hart wrote this new film, which remains tied to the superhero motif but really is a much different kind of movie: Its key character Ruth (Gugu Mbatha-Raw) is unable to deal with the unique superpowers she has and basically is on the run from her family, but most pointedly herself. Fast Color premiered at the 2018 SXSW Film Festival and now finally is getting a well-deserved theatrical release.

Set in a dustbowl area of America, it shows a world seemingly without rain where a long-lasting drought has driven the price of water to astronomical levels. We meet Ruth as she appears to be running away from something, and clearly upset. It turns out she has powers that are extraordinary, and authority figures are after her to discover how they work and how they can use them to their own end. She heads to the sanctuary of the home she left eight years earlier, where her mother Bo (the great Lorraine Toussaint) lives with Ruth’s daughter Lila (Saniyya Sidney), the girl she abandoned all those years earlier when a personal crisis involving her inability to deal with her special powers drove her away. Ultimately this becomes a very human, and humane, story of mothers and daughters — each of whom, it turns out, also is possessed of special superpowers. In this case, unlike most Marvel and DC films, this small gem focuses on using these powers to create, not destroy, even as Ruth is pursued by those who would do otherwise.

Like Wonder Woman and Captain Marvel, there is a female director at the helm, but Hart is working with a far smaller budget than those films. But the CGI special effects on display here indeed are inventive and quite magical, considering the overall budget is probably what craft services gets on a major studio movie set in this milieu. Hart focuses on character and is blessed to have three extremely talented actresses of different generations. Mbatha-Raw again proves her worth in a leading role, but it is Toussaint who runs away with acting honors. Sidney (Fences) fortunately is not a cloying child actor but really charms as Lila. Hart proved in Miss Stevens that she could do exceptional work with young actors and does so again here in a mystical, atmospheric and rewarding film that is worth seeking out wherever you may find it.

Producers are Horowitz, Mickey Liddell and Pete Shilaimon. Click the link above to see my video review with scenes from the film.

Do you plan to see Fast Color? Let us know what you think.