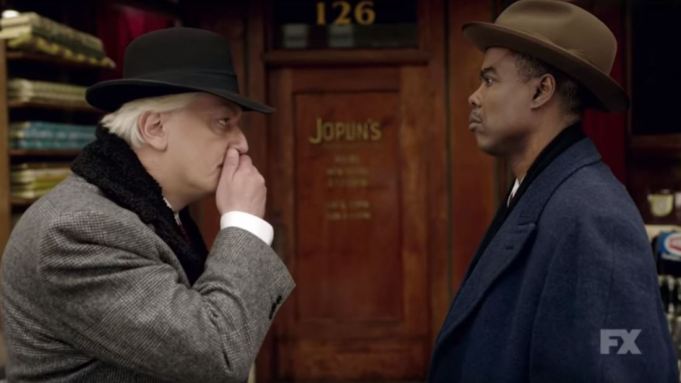 “You sure about this?” black gangster Loy Cannon is asked. “You remember what happened to the Irish.” Well, judging by Cannon’s reply later in the first trailer for Season 4 of FX’s Fargo, he is. “The Italians — they’re the past. We’re the future. They just don’t know it yet.”

Welcome to Kansas City, 1950. It’s the crossroads and collisions of two migrations: Southern Europeans from countries like Italy and African Americans who left the South in great numbers to escape Jim Crow, both fighting for a piece of the American dream. In KC, two criminal syndicates — one Italian, led by Donatello Fadda (Tommaso Ragno), one African American, led by Cannon (Rock) — have struck an uneasy peace, which the heads of both families have cemented by trading their youngest kids.

The cast also includes the likes of Jason Schwartzman, Ben Wishaw, Jack Huston and Jessie Buckley. Have a look at the trailer above.

Noah Hawley On His ‘Star Trek’ Movie &amp; Connection To Greater Universe: “I Have My Own Take”; Updates On ‘Cat’s Cradle’, ‘Doctor Doom’ &amp; More – TCA

“Once I had the idea, I immediately thought of [Rock],” series creator, writer, director and showrunner Noah Hawley said at TCA today. “I met with Chris and pitched what I wanted to do. It was or five months before I had the script. I was definitely writing for him in mind.”

Rock added during the panel: “Fargo is funny like a Scorsese movie, not like a Jim Carrey. As far as themes in the season, some of them I’ve probably touched in comedy routines before. I’ve obviously talked about racism. Racism has been good to me.”