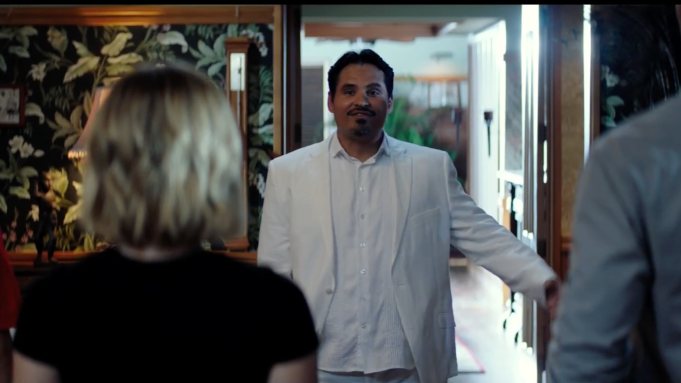 It’s been 35 years since the final episode of the ABC supernatural drama Fantasy Island — does the show still have a foothold in the public imagination? The trailer for the new Blumhouse Productions/Columbia Pictures revival of the brand name suggests that it doesn’t much matter. That’s because this new interpretation Fantasy Island (opening on Valentine’s Day 2020) sheds most of the original Spelling Goldberg Productions show’s DNA in favor of an of-the-moment horror tone and story beat that follow the rhythms of contemporary relationship reality TV shows.

There’s no Tattoo in the trailer (and the mandatory announcements of a plane landing is handled in understated fashion), but there is a Mr Rourke, the enigmatic administrator of a wish-fulfillment resort. The character was played by Ricardo Montalbán in 152 episodes and two TV movies (and also by Malcolm McDowell in a dimly remembered 1990s seal-screen remake) but this time around the role belongs to Michael Peña.

The prolific Peña may be establishing a speciality. He also starred in CHiPs (2017) as Frank “Ponch” Poncherello, a role made famous by Erik Estrada during a September 1977 to May 1983 primetime success on NBC that matched up fairly closely with the Fantasy Island run (January 1977-May 1984).

The trailer suggests the new film is informed by The Twilight Zone‘s wry-twist-of-fate format, horror franchises like Saw and Scream, and head-trip mystery thrillers such as The Game and The Spanish Prisoner.

Fantasy Island opens on February 14, 2020. Jeff Wadlow is the director of Fantasy Island working off his script with Chris Roach & Jillian Jacobs. The film is based on the television series by Gene Levitt. Jason Blum & Marc Toberoff produced, while Wadlow, Couper Samuelson and Jeanette Volturno executive produced.