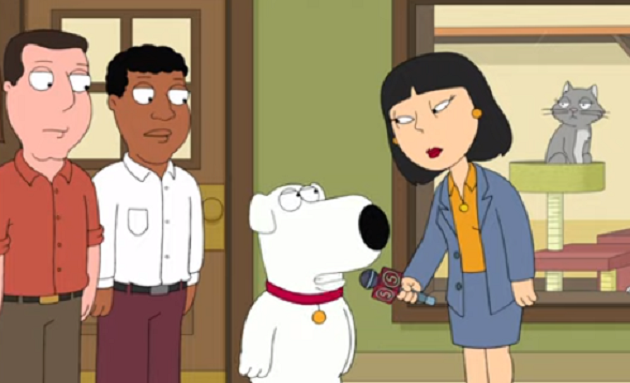 Family Guy will return to Fox in the fall with more animated parodies and Griffin family adventures. The team behind the series unveiled a four-minute preview of the new season today during the show’s Comic-Con peanel in San Diego.

The video shows Peter lounging on a coach — and laughing uncontrollably — with Beavis & Butt-head.

The clip then cuts to talking dog Brian being interviewed by a local TV news reporter. The reporter seems a bit out-of-it, so Brian takes control of the conversation.

“Since I’m on the local TV, I’m gonna talk a little too loud,” he yells into the microphone, adding, “and then occasionally I’m gonna turn away from the microphone to point at things off camera, so my overall point is lost.”

The preview was unveiled for fans as the Seth MacFarlane-created series celebrates 20 years on TV.