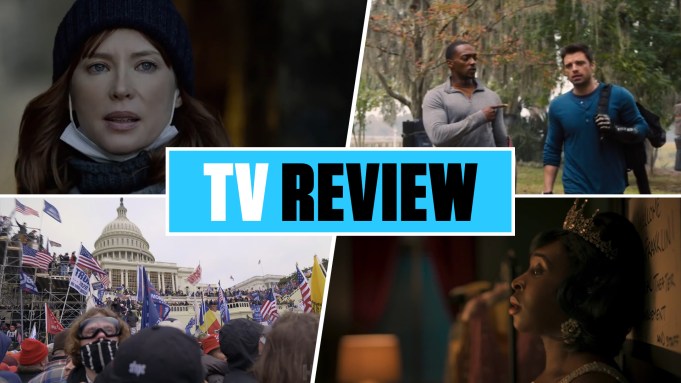 Spring is almost officially here with heroes, icons and mysteries both fictional and real booming on the small screen this weekend.

Of course, only one of them will be the show you have to watch this week – as you can discover in the video review above.

Chronologically, there’s The Falcon and The Winter Soldier first with the Marvel series’ launch on Disney+ tomorrow. Picking up in the aftermath of 2019’s Avengers: Endgame, like its streaming predecessor Wandavison, the Anthony Mackie and Sebastian Stan starring six-parter finds the former Captain America sidekicks Sam Wilson and Bucky Barnes turning into a team of their own in a world gone off kilter.

Already highly anticipated, this latest chapter in the MCU received a big boost off its mega-viewed Super Bowl airing trailer that pretty much erased any hangover from delay of its launch caused by the coronavirus. Empire alum Malcolm Spellman is the showrunner for The Falcon and the Winter Soldier, which is part buddy movie, part action packed thriller and clearly leaning into the times we live in. The series also finds big screen Marvel vets Daniel Brühl and Emily VanCamp onboard with Mackie and Stan. Wyatt Russell, Desmond Chiam, Miki Ishikawa, Noah Mills and Carl Lumbly star too in the Kari Skogland-directed Falcon and the Winter Soldier.

Executive produced by Adam McKay and directed by Cullen Hoback, Q: Into the Storm debuts on March 21 on HBO. Sliding from the backstreets and server compounds of Manila to conspiracy theory festering underbelly of the Internet and the American body politic, the six-art docuseries explores the dangerous and ever growing QAnon movement. Looking for the origins of the pro-Donald Trump digital mob, Q: Into the Storm also seeks to pull back the veil on the madness and paranoia that fueled the fatal attempted insurrection at the Capitol on January 6, and name names.

Also premiering on March 21 on corporate cousin NatGeo, Genius: Aretha brings the big talent of the Queen of Soul to the small screen in a four-night event series. Running double episodes each night, the third installment of the Ron Howard and Brian Grazer executive produced Genius franchise stars Cynthia Erivo as Aretha Franklin.

Having debuted on Australian streamer Stan back in January 2020, the Tasmania-set The Gloaming plants its North American on Starz on March 21. Created by Vikki Madden, the supernatural and sometimes surreal eight-episode murder mystery features Emma Booth and Ewen Leslie as detectives with a shred past thrust back together on the disturbing case.

Across that scope, who will be the show you have to watch this week? Like always, check out the video above to find out.