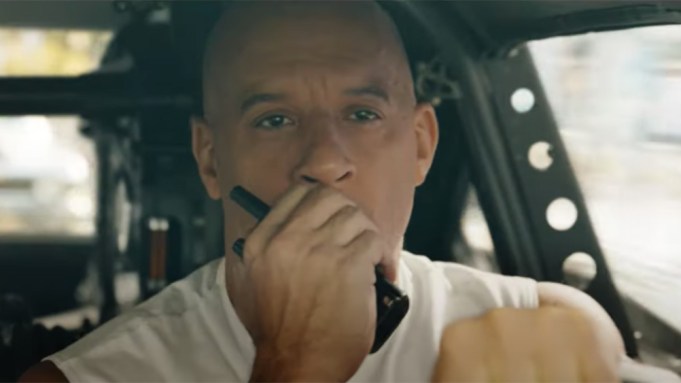 It’s been a while since we have heard from Vin Diesel’s Dom Toretto and his ragtag group of speedsters — until the Super Bowl. Universal Pictures dropped a new 30-second spot for Justin Lin’s F9: The Fast Saga, the next installment of the wildly popular box office blockbuster franchise.

The Super Bowl spot fit in a lot In half a minute including all of the bonkers stunts and impossible feats that the gang manages to accomplish while driving some of the most incredible cars ever to grace the movie screen. We catch glimpses of cast members Michelle Rodriguez, Tyrese Gibson, Chris “Ludacris” Bridges, Jordana Brewster, Nathalie Emmanuel and the retrun of Sung Kang (#JusticeForHan). Helen Mirren and Charlize Theron also pop up during the spot. F9 will also feature John Cena as well as Cardi B as new character Leysa, a woman with a connection to Dom’s past, and a cameo by Reggaeton sensation Ozuna.

In F9, we find Dom leading a quiet life off the grid with Letty and his son, little Brian — but they know that danger is just around the corner. This time, that threat will force Dom to confront the sins of his past if he’s going to save those he loves most. His crew joins together to stop a world-shattering plot led by the most skilled assassin and high-performance driver they’ve ever encountered: a man who also happens to be Dom’s forsaken brother, Jakob (Cena).