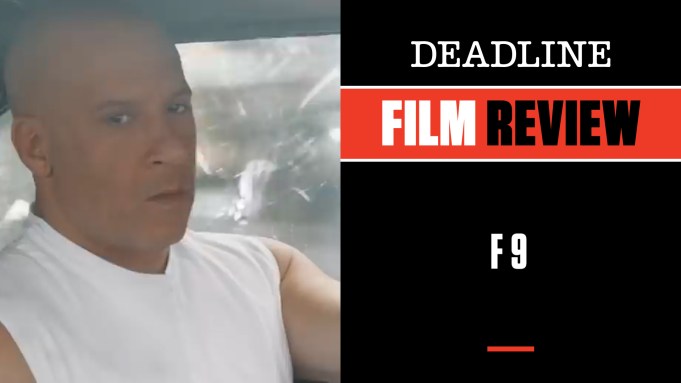 Right off the bat I can tell you I am really rooting for the success of F9, the latest addition to the Fast & Furious franchise, because if this one doesn’t floor it in theaters the pandemic may have claimed the multiplex as its latest victim. Designed to be seen with a raucous crowd applauding every jaw-dropping stunt, Universal was wise to hold this one back a full year until theaters could have some semblance of a reopening. The Asian markets’ launch of the film over the weekend seems to prove them right, but we have a month to go stateside before confirming the appetite for this exhausting series still exists as a true global phenomenon.

I saw F9 with a socially distanced crowd last night at the TCL Chinese Imax screen in Hollywood, and based on the reaction it appears Vin Diesel (more stoic than ever) and company are still working on all cylinders, even if the modest initial intentions of this car-centric idea have ballooned to ridiculous proportions — even to the point of sending two of its major characters deep into outer space in a Pontiac Fiero, a potential jump-the-shark moment that is so endearingly dumb it makes Abbott and Costello Go to Mars look like Nomadland by comparison.

So here’s my advice: Check any expectations of credibility at the door and be comforted by the fact that if you signed up for an extreme series of wacko bananas car stunts and explosions gone wild you will meet your nirvana (and then some) and have some fun in the process.

The Fast movies have been driving out of control for a while, clearly trying to challenge other studio franchise money-minters like James Bond and Mission: Impossible in upping the ante and seemingly leaving nowhere to go but to outer space (actually, Bond did that decades ago in Moonraker, and Tom Cruise is promising to actually make a movie in space). To pull off the extreme over-the-top antics required to meet the expectations of today’s action-savvy fans who demand bigger and more spectacular each time out, producers brought back Justin Lin for his fifth spin around the Fast track after previously helming editions 3-6. He hasn’t missed a beat, though the landscape he and his co-writers have concocted is too crowded with the need to showcase virtually all the characters fans love, plus some newbies just to add to the confusion.

The storyline of F9 swerves all over the place but is Bondian in tone as the gang must stop the bad guys from gaining control of an electronic device that will give them power over all the world’s digital devices. It gets convoluted from there, but that is what Diesel’s Dom Toretto and new wife Letty (Michelle Rodriguez) find as their mission when their idyllic farm life with their child Little Brian (named, of course, for the late Paul Walker’s character) is disrupted by a visit from Tej (Chris “Ludacris” Bridges), Roman (Tyrese Gibson) and hacker Ramsey (Nathalie Emmanuel) with word that Mr. Nobody’s (Kurt Russell) plane is down in the Central American jungle and the deviously evil Cipher (Charlize Theron) is now in his custody.

The central plot, though, finds Dom’s key nemesis this time actually is his long-lost brother Jacob (John Cena, playing it with one pained expression throughout and making us miss The Rock even more), who as it turns out is still smarting from knowing Dom was always their late race car driver father’s favorite as we learn in flashbacks. Now Jacob is intent on world domination by taking hold of that all-important device with the help of vicious henchman Otto (Thue Ersted Rasmussen). Family, a constant theme running through the Fast universe, takes on a whole new level here.

Meanwhile, old favorites like Queenie Shaw (Helen Mirren) shows up for a speed-demon encounter through London with Dom, and the long-thought-dead Han (a welcome Sung Kang) is somehow alive. Other fan favorites are back for the ride including Jordana Brewster’s Mia, but to tell you the truth the real stars of F9 remain the stunt teams and CGI wizards who keep ratcheting up the visual — and preposterous — thrills involving so many variations of car chases, explosions and constant perils therein that I lost count. Whether it is outracing armored trucks, speeding across rickety bridges, surviving minefields galore, or traversing danger in exotic locations across the globe, F9 delivers on what the audience seems to want, and want more more more of, which is why F10 can’t be too far off, and maybe as the end-credit bonus sequence seems to promise, the return of a much needed past Fast star.

Oh, and as for that bonkers outer space trip where Tej and Roman supply the comic relief and seem to be winking at the audience admitting they know this stuff is really stupid, you will either go with it or you won’t, but don’t try to apply logic to a not-so-fast (at 2 hours and 25 minutes it seems too much is thrown at the wall) but very furious summer ride that must be seen on the biggest screen possible. You may not be able to keep saving the world, Vin Diesel, but I am counting on you to save exhibition.

Check out my video review above with scenes from the film. Do you plan to see F9? Let us know what you think.