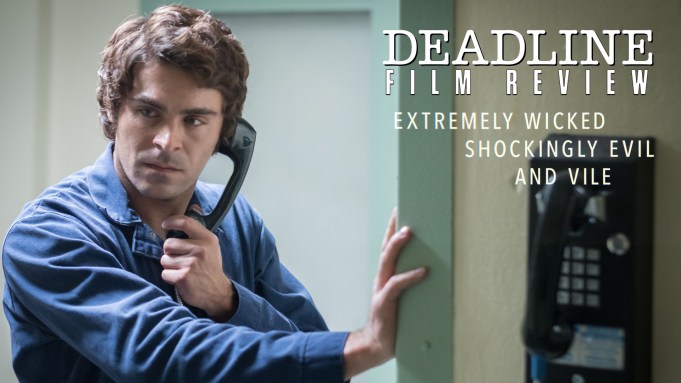 The title of the latest film about notorious serial killer Ted Bundy is Extremely Wicked Shockingly Evil and Vile, but they probably could have made it even longer by adding the words: And Dull.

Documentarian Joe Berlinger has made a well-meaning and thankfully non-exploitative version of Bundy’s dark and repulsive journey as told through the POV of his girlfriend, Elizabeth Kendall, but it doesn’t really offer anything new from past accounts in order to make sitting through this depressing saga revelatory. I have to confess I was shown this film before it even went to Sundance and basically turned up not knowing what I was seeing, so I was able to let it unfold for quite a while before realizing the Ted that star Zac Efron was playing was actually Bundy, the man who made a deathbed confession just before his 1989 execution admitting to killing 30 women in a 1970s crime spree. But the number actually is thought to be much, much higher.

It was a plus to see it fresh this way because otherwise I was very familiar with Bundy’s story from past projects like the 1986 Mark Harmon miniseries and, of course, the actual news coverage of his trial. Still the new movie played fairly flat for me, and its low-key approach, while admirable for its seriousness, just didn’t take off in memorable ways.

That said, one aspect really does work for me and that is the 1979 trial itself, — the first televised court case, and one that turned into a circus with Bundy, a guy with matinee idol looks and charm, defending himself in front of a lot of female onlookers who, believe it or not, were acting like groupies. Efron gets to shine here and, using his own charisma, invests Bundy with a certain likability (hard to say that) that actually explains why he still could command this kind of following, despite the horrors he committed.

Berlinger — who also has a four part docuseries on Netflix (which also picked up this film in Sundance as a companion) with the real deal himself called Conversations With a Killer: The Ted Bundy Tapes — effectively handles the narrative version competently, particularly in the casting of Efron and Lily Collins as the increasingly troubled girlfriend who slowly realized she was living with a monster despite his vehement denials. Bundy’s innate charm got him far, but not far enough as his showdown with the judge, nicely played by an energized John Malkovich, demonstrates.

However at nearly two hours, this film is uneven and probably could have used a little more action, as it were. The murders themselves are barely visible, so the “wicked, evil and vile” aspects are mostly talked about, and that can get a little tedious. The intentions are good and it is hard to argue for a less sober approach, but there you are. Ultimately what is the purpose of all this in 2019?

Michael Werwie did an admirable job adapting Kendall’s book, Phantom Prince: My Life with Ted Bundy, but frankly I hope this is the last attempt at telling his story. You want to wash your hands afterward when you consider all the destroyed lives, including Bundy’s once promising one. In addition to Efron, Collins and Malkovich, there is nice work from Haley Joel Osment and Jim Parsons among those in smaller roles. If the saga of Bundy does still interest you however, this is worth checking out as another way to tell the story. It is certainly respectable.

Berlinger, Nicolas Chartier, Michael Costigan, Ara Keshishian and Michael Simkin are producers. Netflix has a very limited theatrical run starting today, day-and-date with its streaming debut. Check out my video review above including scenes from the film.

Do you plan to see Extremely Wicked Shockingly Evil and Vile? Let us know what you think.