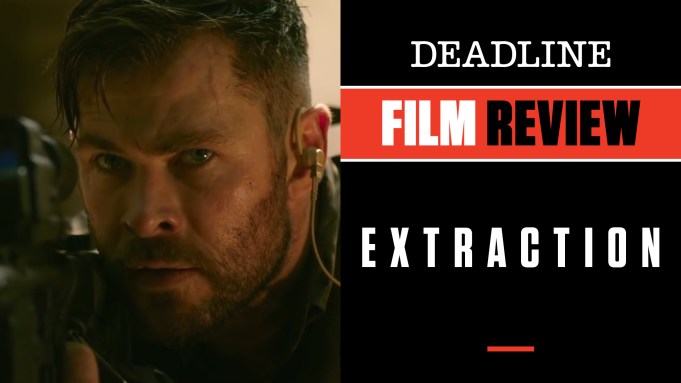 The title for Extraction could just as easily mean “extra action.” You might expect that the reteaming of producers Joe and Anthony Russo and their AGBO production company with one of their key Avengers stars, Chris Hemsworth, could result in something fan-friendly, but the level of action as well as character development for Hemsworth’s broken mercenary on an impossible mission does the genre proud.

Joe Russo wrote the screenplay, based on the decade-old graphic novel Ciudad, and he and his brother serve on the producing team, but they have turned over directing duties to Sam Hargrave, a stuntman for Chris Evans among others, stunt coordinator and second unit director on such high-decibel films as Avengers: Infinity War, Atomic Blonde and The Accountant. His background comes in handy as he stages some very ambitious set pieces including a sweat-inducing 11-minute sequence cut to look like it is all one shot.

That’s just the beginning of this film, which Netflix drops Friday, and it barely stops to breathe. But fortunately, the cast actually gives dimension, in addition to brawn, to these characters and makes the quieter moments score too.

Hemsworth is Tyler Rake, an emotionally destroyed black market mercenary tasked with a dangerous and challenging job of rescuing Ovi (Rudhraksh Jaiswal), the innocent young son of a notorious imprisoned drug lord who has been kidnapped by rivals, and returning him to safety. Grabbing the kid is the easier part, but getting him out of the city is quite another task as Rake’s nemesis, Saju (Randeep Hooda), has his own reasons for nabbing the kid. And there’s also the real villain of the piece, Amir Asif (Priyanshu Painyuli), a murderous gang lord and kidnapper who is lethally evil.

Extraction was filmed in a number of locales, from Australia — Russo made Rake an Aussie — and Thailand to Bangladesh, where the bulk of the action takes place, supposedly in the bustling city of Dhaka (the film’s working title) — a place apparently crawling with criminals, weapons dealers and drug traffickers. It seems that no corner of the town is unused or unseen by Hargrave’s cameras and the ace cinematography of Newton Thomas Sigel (Bohemian Rhapsody, X Men: Apocalypse). The basic plot serves as a template for creating as many excuses for shoot-outs, chases, explosions and fiery encounters as possible, but it is grounded with an intriguing and mysterious central character in Rake, whose own humanity appears to be shot as he’s now a shell of a man running on fumes but given new life in his budding relationship with Ovi, who manages to draw out the human being that once existed.

With minimal dialogue in much of the movie, Hemsworth is especially good in painting a portrait of a guy who is trying to bring everything he’s got left to help this kid find a new life for himself rather than being caught up in the dark work of his father. Russo has said he was influenced by the late great actor Steve McQueen in developing the Tyler Rake character, and you can tell. For many reasons, this is not your typical action lead, at least in the era of the credibility-challenging antics of the likes of Dwayne “The Rock” Johnson. You feel there is a real person lurking inside this now-lost ex-soldier, and it makes all the difference in the ultimate success of Extraction.

The story originally was set in South America, but Russo rightly thought that area of the world was a bit too stereotypical to set another story involving drug lords, so moving it to Bangladesh was an inspired choice. The setting adds flavor we haven’t seen much before in this type of film. It also gave an excuse to cast a number of accomplished Indian actors in key roles, including young Jaiswal, who is terrific as Ovi and establishes the perfect chemistry with Hemsworth to make this all work as well as it does. David Harbour (Stranger Things) also has choice moments as Gaspar, a rogue mercenary buddy of Rake’s who provides shelter for his old friend. Iranian actress Golshifteh Farahadi (Paterson) is excellent as Nik, who brings Rake into the operation and plays a key role as it proceeds.

In addition to the Russos, producers are Mike LaRocca, Eric Gitter, Peter Schwerin and Hemsworth. Streaming begins Friday on Netflix, but it also wouldn’t be a bad idea to let this also play in theaters once things are a bit safer to go out. With its heightened sound design and visuals, this seems to be ideal for the big screen. Check out my video review with scenes from the film at the link above.

Do you plan to see Extraction? Let us know what you think.