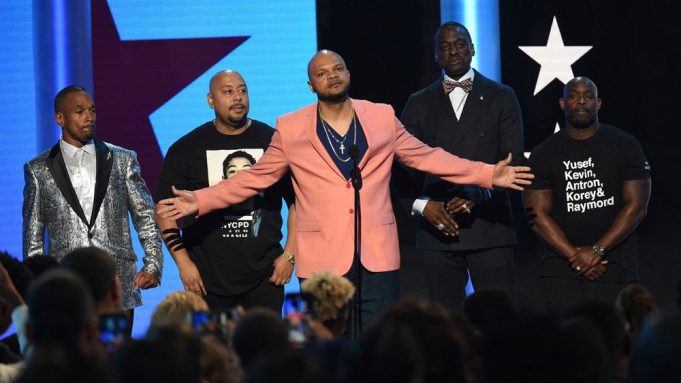 Host Regina Hall introduced the men, known as the Central Park Five, who were convicted and then exonerated in the 1989 sexual assault of a jogger in Central Park, and whose story is the subject of Ava DuVernay’s Netflix miniseries When They See Us.

“We are all on an individual journey in life. We don’t know where our journeys will take us or how they will collide with others,” the men said. “I didn’t know that one day would bond me to these men for the rest of our lives. But I know that in telling our truth, our lives have been changed forever. Your truth is the foundation your legacy will be built upon. Your truth will be the memories people keep long after you’re gone.”

The men served sentences that ranged from six to 13 years for the 1989 attack, then in 2002 were exonerated due to new DNA evidence and a confession from convicted murderer and serial rapist Matias Reyes. The charges were subsequently dropped and the five men were awarded $41 million from the city of New York in 2014. The story received renewed attention recently with the release of Ava DuVernay’s four-part Netflix series When They See Us, which chronicles the case.

DuVernay tweeted her support for the men during show.