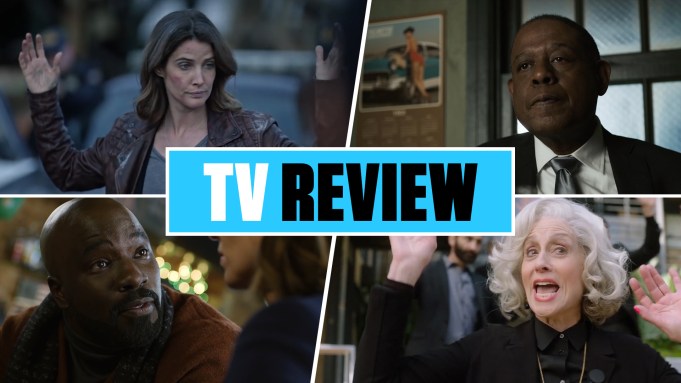 The new Fall TV season is officially underway with new series debuts last night on Fox, NBC and CBS. While it looks like the lowest rated Premiere Monday ever due to the changing habits and options of viewers, the expanse of new shows coming in the next two weeks on broadcast, cable and streaming seems greater than ever.

So, what are the ones to keep an eye on and which series do you have to watch this season?

We looked at Ryan Murphy and Netflix’s The Politician yesterday, as well as new network offerings All Rise, Prodigal Son and Bluff City Law (watch the review here). And you’ll have to check out my video review above today to find out who else is the best of the best.

ABC has Emergence premiering tonight, with the Cobie Smulders-led Stumptown on the menu tomorrow.

Having teased Comic-Con this summer, the Jason Richman drama based on Greg Rucka’s graphic novel focuses on the Marvel movies alum as a strapped for cash P.I. Dex Parios. As well as fighting crime, Smulders’ Parios takes her of her Down syndrome afflicted brother and struggles with PTSD from her military service as a Marine. Michael Ealy, Tantoo Cardinal, Adrian Martinez, Cole Sibus, Jake Johnson and Camryn Manheim co-star in the September 25 debuting Portland, Oregon set show.

Also making an appearance at SDCC this earlier year, Evil is the latest CBS offering from Good Wife creators Michelle and Robert King.

Debuting on September 26, the bluntly titled series pursues the explained and the unexplained with Mike Colter as a curious priest in training and Katja Herbers as an unbelieving psychologist. Add to that Luke Cage and Westworld alum mix, Assif Mandvi as a Catholic Church investigator and Person of Interest’s Michael Emerson as a bad guy and you may have yourself some spooky stuff.

Quiet for the past two years except for the sexual harassment allegations against now fired star Jeffrey Tambor, Transparent is back for the last time on September 27 with a fifth season of a sorts. Mourning the death of Tambor’s Maura character, the truly game changing and award-winning Amazon series from Jill Soloway goes full on musical for its farewell.

A trip back to the NYC of the early 1960s is Epix’s big play in the Forrest Whitaker starring Godfather of Harlem, which launches on September 29. The Oscar winner plays legendary original American gangster Bumpy Johnson in the Chris Brancato and Paul Eckstein and ABC Signature Studios series.

Out of prison and back in the neighborhood, career criminal Johnson intends to reassert his grip on Harlem and try to impose order. Those aims result in a brutal street war with the Genovese crime family and alliances with the Nigél Thatch played Malcolm X. Adding to legends in action, Breaking Bad and Better Call Saul’s Giancarlo Esposito is in Godfather of Harlem as long serving Congressman Adam Clayton Powell. Students of history will know that the ordained Baptist Minister was a man who loved the good life, but often fought the good fight to.

So, what’s the one that you have to see this new TV season? Make a bet, take a look at the video review above and find out!