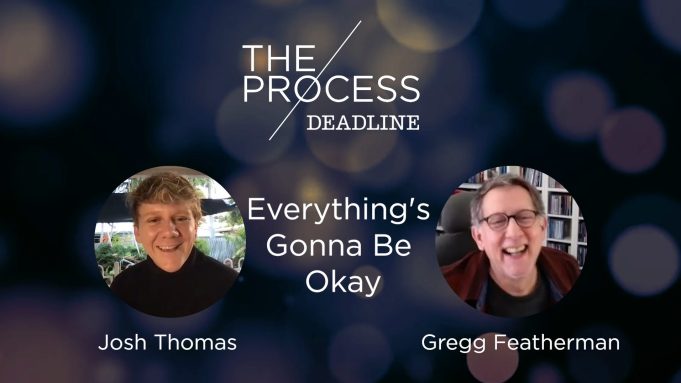 When editor Gregg Featherman first signed on to Everything’s Gonna Be Okay, he relished the opportunity to work with “rhythms” in writing and performance that were “very different” to any he’d previously come across.

He knew for sure that he’d hit on a special project when he started researching the show’s creator and star—Australian comedian Josh Thomas—and Please Like Me, the semi-autobiographical series he had previously created and starred in for ABC2 and Pivot. “You seemed to relish awkwardness and wanted to unpolish the polish a lot,” Featherman tells Thomas on The Process, “and I thought that for me, that would be really an interesting thing to try, to learn how to cut for you.”

In conversation with Featherman, Thomas notes that embracing rough edges has long been a part of his philosophy, or thought process, with regard to his series. “I like to keep the mistakes in. When we’re going through dailies, I’m usually looking for mistakes in the broken scenes,” he says. “I’m usually looking for charming mistakes, and then we build the scene around some other charming, little moments that we find.”

Wrapping up its second season in June, Everything’s Gonna Be Okay centers on Nicholas (Thomas), an Australian in his twenties who ends up raising his two teenage half-sisters in Los Angeles, after his American father’s untimely death. While the character has much to figure out in his personal life, he also ends up becoming a far better guardian to Genevieve (Maeve Press) and Matilda (Kayla Cromer) than he might have ever imagined.

Interestingly, another of Featherman’s draws to the show was Matilda, a young woman on the autism spectrum, who also happens to be played by an actress on the spectrum. This is, he explains, because he has his own daughter who’s around the same age, who is on the autism spectrum, as well. “My daughter wants to be on the show, but now she’s taking a class in performing for TV,” the editor tells Thomas. “She wanted me to tell you, by the way, that she will be on your show, but not until she finishes her class.”

Thomas knew about Featherman’s daughter when he hired him and was excited to be able to create onscreen representation for her, through his show. At the same time, he wasn’t sure how helpful the editor’s firsthand experience with autism would be, in terms of his work—in cutting Cromer’s performance as Matilda, for example. This was because each person with autism is so different, that it’s impossible to generalize about people on the spectrum in any sense.

Of course, Featherman also knew this was true, as he boarded the series. But from his perspective, his experiences with his daughter have actually been incredibly informative, in the work he’s done on Everything’s Gonna Be Okay. “If I’m working with the character of Matilda and I have several different takes, I feel like life with my daughter informs my choices quite a lot, actually, and I find that for me, it’s super helpful,” he shares. “It may not translate into our work together, but when I’m cutting the show and looking at the performances, it has an enormous influence on why I’ll choose one and not another.”

In their refreshingly candid chat about the entertainment industry and the art of editing, Thomas and Featherman touch on a range of subjects you’d never expect to hear in an interview of its ilk, including the worst show Featherman ever worked on, the time he got yelled at by Harvey Weinstein, and the bad behavior of many other “volatile” people in the industry. Thomas admits, for his part, to the “intense self-doubt” that sometimes affects him, in cutting a show centered on his own performance, also speaking to the aspect of editing he finds most difficult, as someone with ADHD and autism.

“One of the things that I find frustrating about editing, just as far as my life goes, is it is the one process where we’re always in the sh*t bits of the show,” he says, with a laugh. “Because of course, if the scene’s good, then you move on, right? You’re always in the problem areas, and it’s the only part of the whole process of making TV where just all day, you’re wallowing in failure.”

Fortunately, at the end of the day, there is little failure to speak of, with regard to his latest series. While building a very passionate fan base, Everything’s Gonna Be Okay has also broken barriers, in terms of representation in Hollywood. (Thomas and Cromer are two of the first people with autism spectrum disorder ever to play lead characters with autism on American television.)

Of course, despite all the work required to bring it together, Everything’s Gonna Be Okay has also been “a labor of love,” both for Thomas and for Featherman, who had nothing but good things to say about the generosity, kindness and patience of his boss. “One of the things that I try to learn from you is how to get what I want with kindness, which I see you do all the time,” the editor shares. “I see it with me, and I see it with other people that you work with on the show, and I see it with all the dealings and the politics of the show, and it’s something I really try to learn from you.”

For more from Featherman’s conversation with Thomas on The Process, check out the video above.