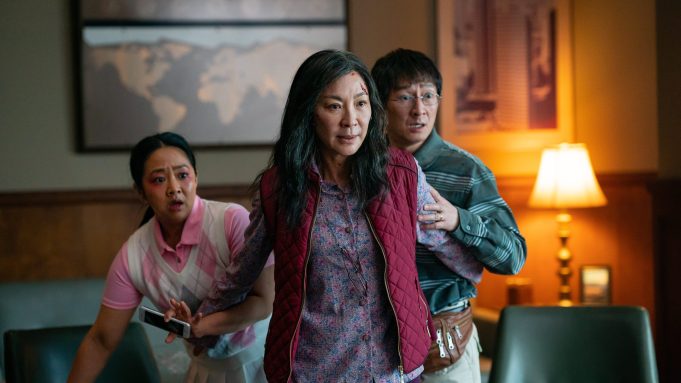 A24 today unveiled the first trailer for Everything Everywhere All at Once, announcing that the latest film from Daniel Kwan and Daniel Scheinert (Swiss Army Man) is set for release on March 25, 2022.

The sci-fi adventure pic from the writer-directors collectively known as Daniels centers on Mrs. Wang (Michelle Yeoh), an exhausted Chinese American woman who can’t seem to finish her taxes.

The trailer sees Wang sit down with an auditor-type character portrayed by Jamie Lee Curtis, who expresses concern with regard to her financial situation. “Now, you may only see a pile of receipts, but I see a story,” Curtis says. “I can see where this story is going. It does not look good.”

Subsequently, we see the film blow past its humdrum logline into a more fantastical world, watching as Wang is thrust into a “multiverse.” She comes to recognize that there are thousands of versions of her spread across it, and that she can access the memories, emotions and skills of each.

“There’s a great evil spreading throughout the many [universes],” a character played by Ke Huy Quan tells her, “and you may be our only chance of stopping it.”

Everything Everywhere All at Once has been selected to open the the 29th SXSW Film Festival on March 11. Stephanie Hsu, James Hong, Jenny Slate and Harry Shum Jr. round out the cast of the film, which Kwan and Scheinert produced with Jonathan Wang, The Russo Brothers’ AGBO and A24. Josh Rudnick exec produced with Ley Line Entertainment and IAC.

The trailer for the anticipated film can be found above.