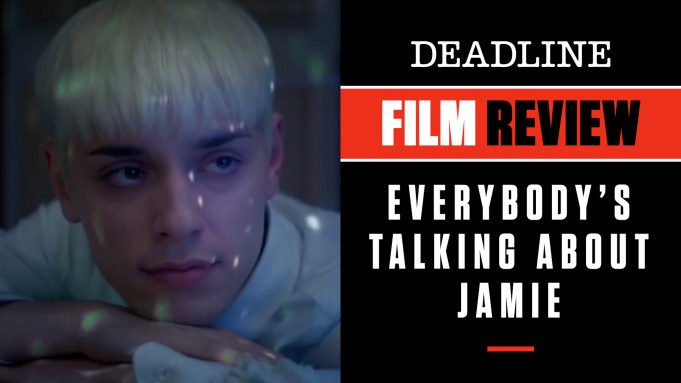 I’m not exactly sure everyone will be talking about Everybody’s Talking About Jamie, but this film adaptation of the London West End musical hit is heartfelt and winning in its own right. The terrific cast, including newcomer Max Harwood as the title character and a scene-stealing Richard E. Grant, is perfectly chosen to make this indie charmer something to see. It had its world premiere at Outfest over the weekend before it starts streaming September 17 on Amazon, where it ought to find a receptive audience.

The show itself started life as a collaboration between writer Tom McRae (who also wrote the screenplay) and musician Dan Gillespie Sells, responsible for the songs and collaborating on the film’s score with Oscar winner Anne Dudley (The Full Monty). It managed to find its way rather quickly to London’s West End and also will be a part of the upcoming season for L.A.’s Ahmanson Theatre, even after the exposure for this movie version on Amazon. That follows much the same trajectory of Broadway’s The Prom, which almost instantly became a Netflix film from Ryan Murphy but also will be turning up at the Ahmanson for that stage version as part of its Covid-delayed national tour.

Although there are similarities here (in The Prom, a teenage girl wants to attend her prom with her girlfriend, while in Jamie, our young lead, wants to go to his in full drag regalia), Murphy’s film had the benefit of an all-star cast including Meryl Streep, Nicole Kidman, and Kerry Washington and came from source material that put the emphasis on their characters rather than solely on the plight of its teenaged protagonist. While critically mixed, I loved both that crowd-pleasing show and the film. Jamie is a much more modest picture, probably more fair to be compared as more of a junior Kinky Boots than anything else. Taken on its own terms, it’s got real heart and that’s a good thing. It also is coming out in a season unusually full of musical films; in fact, it’s being released as a streaming attraction just a week before Universal opens its much-awaited film version of Dear Evan Hansen, which also puts the focus on a teen with growing pains.

Story-wise, the British Jamie really benefits from being inspired by actual people and was the basis of a 2011 documentary, Jamie: Drag Queen at 16, which told the tale of a young Sheffield man whose dream of becoming a drag queen was supported by his loving mother, opposed by his homophobic father and school bullies but triumphant in the end. The fact that it’s all happened — footage of the real-life people is shown over the end credits — gives it gravitas. Also impressive considering the results is the fact that director Jonathan Butterell, who comes from the stage including the original production of Jamie which he was also responsible for launching as a theatrical production, along with the aforementioned MacRae and Sells are first-timers in terms of filmmaking. They have acquitted themselves nicely here by keeping the musical grounded and rather simple and sincere, avoiding clichés and serving as a feel-good tonic in tough times.

Harwood never had acted before landing this plum gig, and he is thoroughly engaging, confident in his singing and fledgling showmanship and clearly understanding the core of this kid. Similarly fine is Lauren Patel as his best friend Pritti, along with a decent supporting cast playing the other teens. Among the adults we have the great Sharon Horgan in an unsympathetic role as a school counselor of sorts devoted to dashing dreams; Ralph Ineson (also on screens now starring in The Green Knight) as the disapproving dad; and a wonderful Sarah Lancashire as Jamie’s mum, who also has one of the film’s best songs (“He’s My Boy”). But without question the best of anyone in the film is veteran Grant as the aging local drag queen Miss Loco Chanelle, delivering an amusing, poignant and knowing turn as Jamie’s mentor that rivals Robert Preston’s Oscar-nominated turn in 1982’s Victor/Victoria. Grant, who should have won an Oscar for Can You Ever Forgive Me? is great here too. You only wish he had more screen time, but the emphasis for this film is solely on Jamie, hence the title.

First-timers or not, the filmmakers here should be proud of what they have accomplished, and this film is certain to become a welcome discovery with real word-of-mouth potential once its hits Amazon. Producers are Mark Herbert, Peter Carlton and Arnon Milchan. Check out my video review with scenes from the film at the link above.

Do you plan to see Everybody’s Talking About Jamie? Let us know what you think.