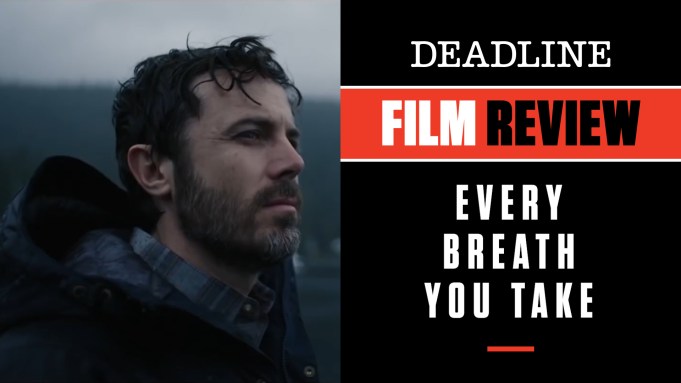 First off, can somebody please find a romantic comedy for Casey Affleck to do? It seems that with every movie I have seen this fine actor in lately he is experiencing some sort of intense grief. Perhaps it was the impact of his Oscar-winning performance in Manchester By the Sea, but nobody does depression better than Affleck, and in the new psychological thriller Every Breath You Take he is back in form. But this time around the movie is more on the pulpy side, less deadly serious and more designed as the kind of entertainment Hollywood was so obsessed with throughout the ’90s (maybe as a result of late-’80s blockbuster Fatal Attraction).

This one seems drawn from the same playbook as movies like The Hand That Rocks the Cradle, Sleeping With the Enemy and Single White Female. Affleck’s Philip is married to Grace (Michelle Monaghan), who as we see in flashback survived a horrendous car crash that took the life of her young son. The family is grieving and not quite able to get over this tragedy, and that also includes daughter Lucy (India Eisley), a teen with problems of her own. At the same time therapist Philip is treating a disturbed young woman Daphne (Emily Alyn Lind) with a litany of problems including suicide attempts and an abusive boyfriend she talks about, and which Philip, using a generic name for her, shares with a college class as he defends a treatment that involves discussing his own traumas with a patient, something that doesn’t go down well with faculty dean Dr. Vanessa Fanning (Veronica Ferres).

Eventually, things seem to be looking up for Daphne and she states she is writing a very personal book. But after a new dramatic incident in her life involving a close friend’s hit-and-run death, she calls Philip and he agrees to see her the next day. When she turns up dead instead, a presumed suicide, trouble starts brewing, with complications for Philip’s own family as well involving the introduction of James (Sam Claflin), Daphne’s devastated brother who turns up at their house to return a book his sister borrowed. Grace invites him for dinner, and before you know it James finds himself getting romantically involved not only with impressionable Lucy but also (with neither knowing about his dueling seductions) with Grace. Much of the film deals with this juggling act until, well, you can probably guess, things get dicey for everyone.

Watching the twists and turns, as well as Claflin’s expert navigation through a torrent of female problems (and scenes showing James intently reading something on his laptop), director Vaughn Stein steers screenwriter David K. Murray’s credibility-defying script into something remarkably resembling plausibility despite the melodrama. Even in a frantic car-chase scene that threatens to send the entire film off the rails, somehow Stein keeps it on track as a fairly entertaining popcorn picture. Affleck and Monaghan are all pro, Eisley is properly emotionally mixed up, and Claflin shows a side he hasn’t gotten to do before in movies. It is all very slick and watchable.

Check out my video review above with scenes from the movie. Do you plan to see Every Breath You Take? Let us know what you think.