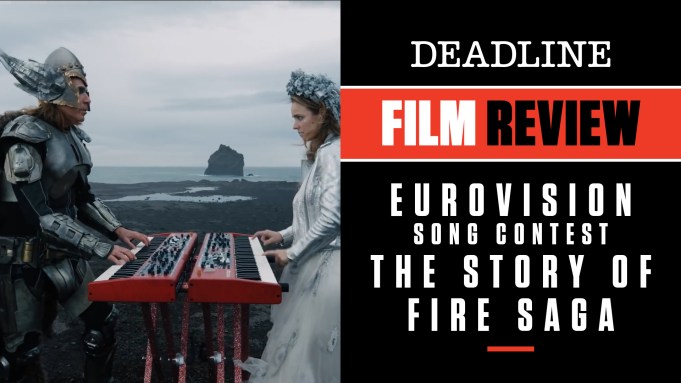 If you loved Will Ferrell passing himself off as a men’s figure skating champ in 2007’s Blades of Glory, then I have the perfect streaming movie for you. In Netflix’s Eurovision Song Contest: The Story of Fire Saga, Ferrell is back on the ice, sort of, as an Icelandic wannabe singer whose lifelong dream is to be selected to represent the country, and his small fishing village, in the Eurovision song competition extravaganza.

This is a real thing for those outside of Europe who may never have heard of it. Founded in 1956, about 40 nations, now including Israel and Australia, send local winners to compete for the title in an elaborate television spectacle where some of the acts from Russian Babushkas to wrestling werewolves to techno-centric turkey puppets take center stage in a contest in which wild unfiltered garishness is never enough. It is must-see TV overseas, kind of a Super Bowl-size event, and Ferrell turned out to be a fan from watching it over the years in his wife’s home country of Sweden. That it could be good fodder for one of his spoofs seemed like a no-brainer and thus the movie was born, with a screenplay from its star and frequent collaborator Andrew Steele who first met him on SNL.

Ferrell plays his typical man-child here, Lars Erickssong, who as a shy kid was inspired watching a performer sing Abba’s “Waterloo” on Eurovision in the ’70s, immediately rocking out in front of the TV, and being joined by a young girl there visiting at his house, Sigrit Ericksdottir (Rachel McAdams), who also dances as his father (Pierce Brosnan) looks on with a sickly expression, hoping his son would rather follow in his fisherman footsteps. No such luck: Lars is dead-set on a musical career, and with Sigrit and his band Fire Saga, he performs every chance he gets, even coming up with a local favorite tune called “Ja Ja Ding Dong.” When a horrible explosion blows up all of Iceland’s more logical choices, Lars and Sigrit find themselves entered into Eurovision by default. This is their big moment and they play it to the hilt, eventually performing their original song (all songs must be original) in a disastrous act where Lars rolls around in a huge hamster wheel (don’t ask). That bit is actually quite funny thanks to Ferrell and McAdams and their ability to just go all in on the slapstick.

Unfortunately, too many of the attempts at humor, including a seeming obsession Ferrell and Steele have for dick jokes, fall flat. Maybe it would all seem hilarious if seen in a full theater, but all we have here is Netflix so you are on your own. That said, co-star Dan Stevens (Downton Abbey) as a George Michael-ish Russian Eurovision veteran competitor is deliciously amusing, and thankfully restrained, as Alexander Lemitov. If there was a price of admission it would be well worth it just to see him perform, in deep operatic voice (he’s dubbed), a terrible song, “Lion of Love” backed by a quarter of shirtless male dancers adorned in gold lamé pants. His outfits are even worse, but Alexander befriends Lars and even tries to seduce Sigrit, who has for some reason always pined for her singing partner but to no avail. Stevens proves to be a truly gifted comedian here, without really trying (something Ferrell could take a clue from). He steals this thing lock, stock and barrel.

Among the cast, McAdams nicely underplays Sigrit and is genuinely sweet in the role; it looks like she is having a ball. Demi Lovato shows up for a few scenes as a top Iceland talent, even belting out “In the Mirror” before being sidelined. Brosnan is basically slumming here, but based on his previous musical work in Mamma Mia! fortunately does not have to sing. Director David Dobkin (the very fine The Judge, Wedding Crashers) effectively stages the many musical numbers, unquestionably the highlights of the film, and proves adept at spoofing a spectacle that itself is a joke in many ways, no easy feat. Dobkin’s past work on videos for the likes of Maroon 5 makes him a natural choice to pull this off — and he does.

As for Ferrell, well, you know what you are getting when this often funny guy plays this type of role, but this is no Anchorman, Stepbrothers or Talladega Nights if that is what you are hoping for. There is a lot of unnecessary fat in its over two-hour running time; some judicious trimming of the stuff that doesn’t really work would have been welcomed. One-joke comedies that might have started as an SNL sketch idea should not drag on by pounding every gag into the ground.

Kudos to the songwriters who came up with material this horrendous, yet with bouncy melodies. I would love to see Stevens get to perform “Lion of Love” on the Oscars. Producers are Jessica Elbaum, Chris Henchy and Ferrell. Netflix begins streaming Friday.

Check out my video review with scenes from the movie above. Do you plan to see Eurovision Song Contest: The Story of Fire Saga? Let us know what you think.