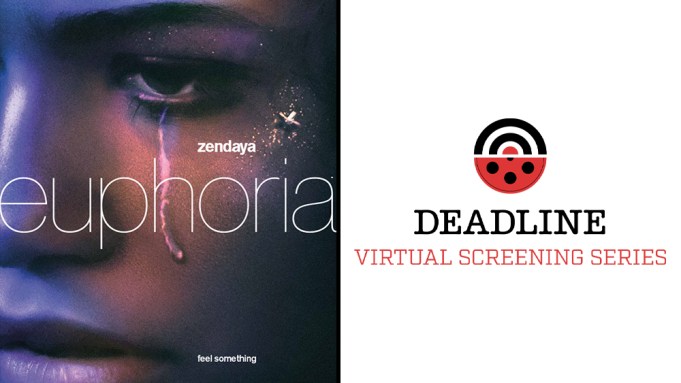 In its first season, HBO’s Euphoria reshaped how we see the typical teen drama. The series follows Rue (Zendaya), a 17-year-old addict who struggles with recovery until she meets Jules (Hunter Schafer), the new girl in town who changes things in her life. Created by Sam Levinson and based on his own experiences (and the Israeli series of the same name), the drama puts the spotlight on these two characters as well as a group of high schoolers who attempt to navigate the volatile SoCal landscape of drugs, sex, identity, trauma, social media, love and friendship. During a Virtual Screening Series Q&A, Levinson, Zendaya and Schafer unpacked the thematic heft of the series and Levinson talked about how it was like revisiting these experiences of his own life.

“It’s a strange way it’s cathartic when you’re able to take moments in your life that were traumatic or hard and find a way to give them away,” Schafer told Deadline. “It’s an interesting process when we’re shooting its step by step. You give it to an actor and the actor embodies it then you see as it a scene then you cut it together. It’s kind of this slow distancing.”

Euphoria presented a different type of role for Zendaya, who has appeared in movies like Spider-Man: Far From Home, but from the jump, the role of Rue spoke to her.

“This sounds corny, but I listened to my heart,” said Zendaya in regards to reading the role of Rue for the first time. “I didn’t think strategically ‘this is the role I should be doing’. I just fell in love with what I read, the character and there was no doubt in my mind that I needed and wanted to do this. It’s purely because I felt connected to it.”

Schafer, in her breakout role as Jules, had a similar sentiment adding, “The first time reading the script, almost immediately I was shook how real it felt. It was my first full script I ever read so I didn’t have much to compare it to.”

Many people may see the series as “gritty” but there is a sheen that is stripped from the drama that makes it more real and authentic when it comes to being a teenager today. Beyond that, it gives an honest and empathetic depiction of addiction and being understood by others.

“We talk a lot about authenticity and I think authenticity is important but you can achieve authenticity just by listening. Part of what’s key is to have a perspective about it — how these characters are,” said Levinson.

He adds, “It’s really important that we’re looking at these characters from a human standpoint and empathy and who they are inside of this world. That ultimately is what resonates with anything else.”

Speaking to that, Zendaya points to episode seven where Rue is having a manic episode. “It’s one of the most brilliant things I ever read,” she said. “What was beautiful about that is seeing people’s reactions to it because I felt when I read it, people needed that episode.” She adds that the episode articulated something that can’t be put into words.

Watch the full conversation with Levinson, Zendaya and Schafer above.