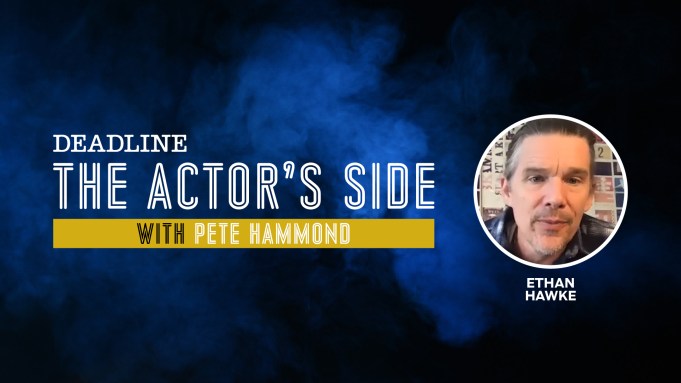 To say Ethan Hawke does it all really is an understatement. Best known as an actor who began as a child star in 1985’s Explorers and grew into a multiple showbiz threat, Hawke has directed and written several films, appeared on Broadway and Off Broadway, been nominated for a Tony and directed three Off Broadway shows. He has written three novels plus a graphic novel and been nominated four times for Oscars, including two in Adapted Screenplay category for the Before Sunset trilogy of films. He also has been nominated for numerous other entertainment industry awards, but this year he is poised to perhaps finally be recognized with an Emmy nomination, or two, for his work as creator, co-writer, executive producer and star of Showtime’s acclaimed The Good Lord Bird, the limited series that tells the story of the little-known abolitionist responsible in part for starting the American Civil War. He’s quite a character, and Hawke recognized it immediately after reading James McBride’s 2013 novel.

Hawke already has been recognized for his work on the seven-part series with WGA, SAG and Golden Globe nominations. He joins me for this week’s edition of my Deadline video series The Actor’s Side as we discuss the reasons he wanted to take on this project and why Brown was such a fascinating and lively character to play and write. We also discuss Hawke’s career and choices, and why his first film Explorers made him rethink his entire career trajectory until several years later when Dead Poets Society changed its course. His Oscar-nominated work in Boyhood is discussed, along with many other highlights of a unique career that knows no boundaries and keeps surprising us in rich ways.

The edited version of our conversation is above, and the entire uncut interview is below.