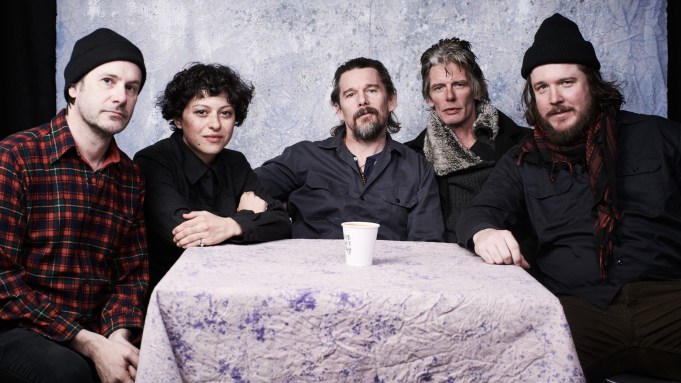 ‘There’s something shamanistic about acting at its best,” Ethan Hawke said this year at the Sundance Film Festival. “When you see a performance at a real high level, there’s something like a shamanistic dance about it, to be honest,” the four-time Oscar nominee, 12-time visitor to the Utah shindig and Blaze director adds, complimenting the cast of the film about outlaw country artist Blaze Foley.

With a cast that includes already acclaimed newcomer and musician Ben Dickey, Alia Shawkat, Josh Hamilton and six-string virtuoso Charlie Sexton, Blaze is the fourth feature-length film Hawke has helmed. Yet for the Boyhood star, the focus on the life of the “Clay Pigeons” songwriter is the first time he has had a film he’s directed in the U.S. Dramatic competition category.

Over five Sundance 2018 screenings, including one today, and a hell of a jam session party on January 21 on Park City’s Main Street, Blaze wasn’t the only skin Hawke had in the indie game this year. He also appeared in the comedy Juliet, Naked and the Eugene Jarecki Elvis douc-road movie The King at the Robert Redford-founded festival.

For all that and more, take a look at my interview with Hawke, plus Dickey, a very funny Sexton, Shawkat and Hamilton in the video above.

With Blaze in competition, Sundance 2018 has its  Jason Mantzoukas-hosted Awards ceremony tonight in Park City and then wraps up tomorrow.