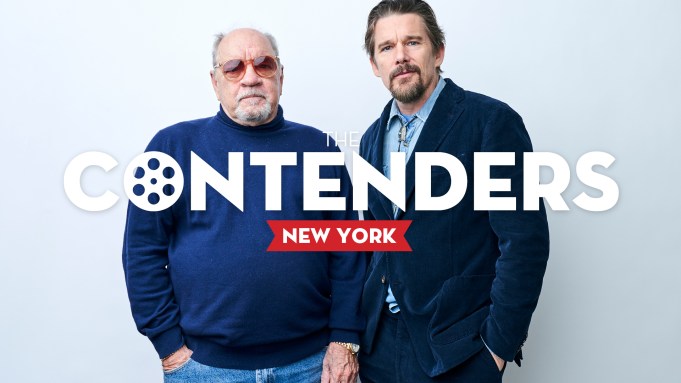 A24’s First Reformed, written and directed by Schrader, who grew up in a strict Calvinist household, depicts the spiritual odyssey of a conflicted minister played by Hawke. The film bracingly updates classic religion-themed films like Bergman’s Winter Light, adding modern themes of eco-terrorism and the societal effects of digital media and income inequality. More than anything, it is a compelling meditation on the essence of spiritual practice, with its central setting of a fading upstate New York church serving as a metaphor for organized religion in the 21st century.

“Worship has divided into two factions,” Schrader said, identifying them as “contemplative worship” and megachurches, whose services resemble sporting events. In addition to the churches depicted onscreen, he added, “There are a lot of things in the world that fell into place here.”

Hawke, who has received some of the best reviews of his career for the performance, told the crowd of Academy and key guild voters at the DGA Theater that it was the kind of part that made sense at his age (48) to tackle. “There’s a lot of obvious downsides to getting older, but one of the good ones is the characters you get asked to play have a lot more experience,” he said.

Vachon, the battle-tested, New York-based producer of dozens of films, has a longstanding friendship with Schrader that made the task of mounting the tricky production easier to manage.  “Getting the movie together was pretty hellacious,” she said, “but once we actually started shooting it was one of the best experiences. … Paul knew absolutely exactly what he wanted to do, and he went out and executed perfectly.”