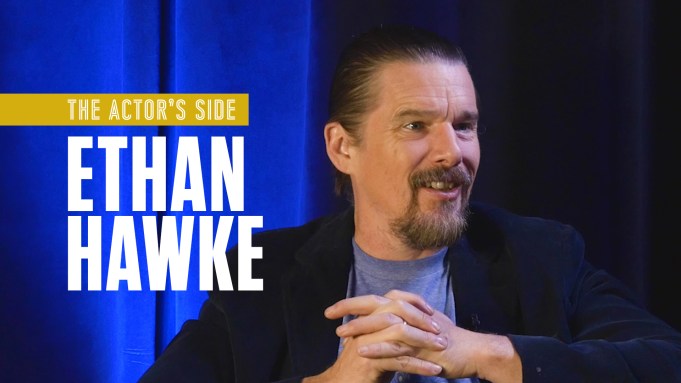 A four-time Oscar nominee with nods for both acting and screenplays, Ethan Hawke is certainly on a roll this awards season, having already racked up a leading 20-plus best actor wins from critics groups for his acclaimed role as a  minister in the midst of a spiritual crisis in Paul Schrader’s First Reformed. Hawke is one of the busiest filmmakers around, and now is starring with Paul Dano on Broadway in a revival of True West. Recently. He took time away from rehearsals for that show to visit our Deadline studios to appear in the latest episode of my interview series The Actor’s Side.

Hawke is a real raconteur and a highly intelligent guest who covered several topics in our talk, beginning with the difference between mainstream and art films — defining them as “popcorn versus cappuccino pictures” and trying to explain what makes “a great movie.” He also discusses his connection to the religious figure he plays in A24’s First Reformed by saying a member of his family was actually trying to drive him toward the priesthood early in his life, and how that memory helped inform his performance. His experience working with Schrader, a director merging his spiritual life with cinema, is also covered, along with the fact this is the rare movie these days dramatizing religion in a meaningful way.

We also talk about Hawke’s early acting career including a flop (Explorers) that caused him to rethink his entire career path until another movie, an Oscar winner, came along and set his acting career on the right trajectory. “Everything I have done began with acting,” he says, while also discussing his other love which is working behind the camera as a writer and director, and “creating the possibility for magic.”

Click on the video above to watch our conversation. To past episodes of The Actor’s Side, click here.