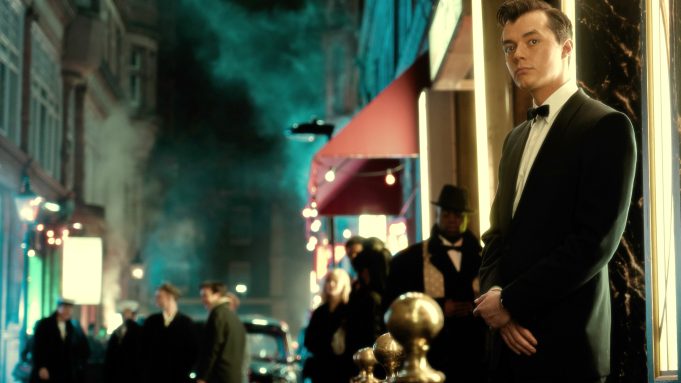 The just-arrived trailer and key art for Pennyworth expands the already considerable screen history devoted to Batman-centric mythology with a prequel tale set in England in the 1960s that focuses on young Alfred Pennyworth, the future Batcave stalwart and manservant to Bruce Wayne.

The 10-episode, one-hour Epix drama series premieres July 28th and chronicles the early adventures of the intrepid Pennyworth (Jack Bannon) by picking up with the character in his 20s in England when he is fresh from a stint as a British SAS soldier and working as a bouncer. Pennyworth’s Gotham City destiny begins to take shape when he accepts a security job with a young American tycoon named Thomas Wayne (Ben Aldridge), who is not yet the father to Bruce Wayne.

Pennyworth is from executive producer/writer Bruno Heller (Gotham, The Mentalist, Rome) and executive producer/director Danny Cannon (Gotham, CSI series). The new show is a stand-alone story and is not tethered to the continuity of the just-concluded Fox series Gotham, which for five seasons chronicled tales of Gotham City in the years ramping up to Bruce Wayne’s first masked-man exploits.

Alfred Pennyworth first appeared in the pages of DC Comics in 1943 and has been portrayed as the manservant of stately Wayne Manor in most every medium that has adapted Batman. On television, Pennyworth was memorably portrayed by Alan Napier on the 1966 Batman series. On the big screen actors such as Michael Gough, Michael Caine and, most recently, Jeremy Irons have portrayed the irascible Batcave butler.

Pennyworth is currently in production at Warner Bros Studios Leavesden in the UK. The drama is from Warner Horizon Scripted Television, which also has the Superman prequel series Krypton, which is set on the doomed planet in the years before the hero is born. Krypton’s Season 2 premiere airs tonight.