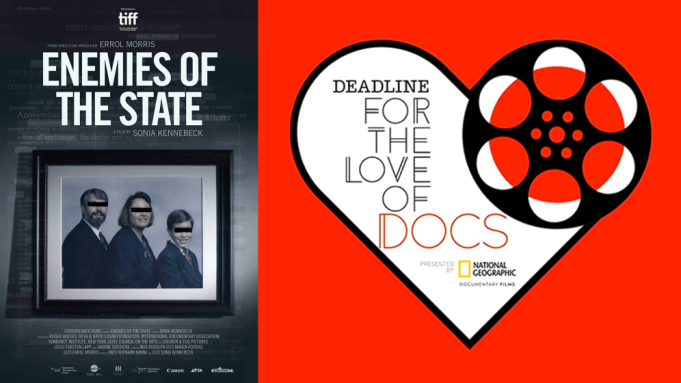 The compelling documentary Enemies of the State, directed by Sonia Kennebeck, delves into one of the strangest cases in recent American jurisprudence involving spy craft, allegations of torture and child pornography.

“The story sounded so complex,” Kennebeck recalled during a panel discussion for the film. “It had government secrecy and paranoia and allegations about government misconduct and torture.”

DeHart’s parents, Paul and Leann, themselves ex-military, became key figures in their son’s defense, and they spoke at length with the filmmakers. The bond between parents and child stands out as exceptionally close.

“They really become a crucial part of the story,” producer Ines Hofmann Kanna said of Paul and Leann. “It was fascinating to us how deeply they got involved with their adult son. This was not a child, this was an adult… [They went] so far as to literally break his ankle bracelet [monitor] and leave the country with him. So that is just so unusual. That is parental love to an extent that we just haven’t seen.”

Matt DeHart sought asylum in Canada. The filmmakers gained access to transcripts of interviews he did with Canadian authorities in support of his case for resettlement. To make the proceedings come alive, the filmmakers hired actors to play the DeHarts and other characters, and the performers lip-synced the real audio.

“It was quite challenging because it was important to me that people would recognize these actors, so we had to cast actors that looked very much like the real family,” Kennebeck noted. “And in particular, the actor Joel Widman who was playing Matt DeHart had to learn his words by heart [from the transcript] so he could really act to them.”

As in all criminal cases, each side insisted on the primacy of its own version of the truth.

“This story has so many layers of different perspectives and contradictory perspectives,” Kennebeck said. “Each of the characters retells their own stories and has an agenda, to be honest.”

Not content to accept Matt DeHart or his parents’ version of events, or the account of American law enforcement authorities, Kennebeck, Kanna and their team continued their own investigation. And what they uncovered cast a very different light on events than what Matt DeHart had claimed. The FBI wouldn’t talk, but Kanna and Kennebeck ferreted out information in other ways.

“You can’t really cut corners. You have to dig into stuff that is extremely boring… There are many, many documents to read, hundreds of pages to get and to read and to dig through,” Kanna said. “It’s just extremely time-consuming. Things could change within a day or within a week… So you open many doors.”

Along with open doors, they kept open minds, evaluating evidence as it materialized. Director and producer say it actually helped that key members of the production didn’t necessarily agree on the truth in the case of Matt DeHart.

“Just talking about everything really, really helped,” Kanna said. “And obviously we bring our own ideas and prejudices and how we read people–we bring that to the table as well, which also helps that we’re not always at the same opinion and challenge each other in our perceptions.”

Watch more of the conversation with Kanna and Kennebeck in the video above. For The Love of Docs is sponsored by National Geographic.