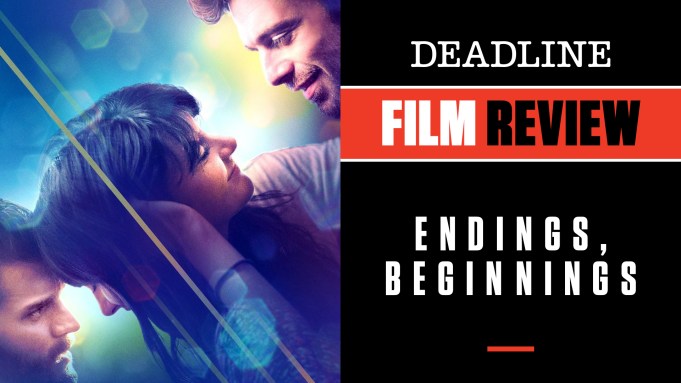 After modest quirky early indie features like Douchebag and Spooner, director-writer Drake Doremus won well-deserved critical acclaim for his breakthrough 2011 romance Like Crazy that featured Felicity Jones, Anton Yelchin and Jennifer Lawrence. Since then, his record has been more inconsistent, including meh detours into sci-fi, but now is back in his comfort zone navigating the complicated corners of relationships — again with an attractive young, name cast to really make it sing. Following last year’s moving documentary on Yelchin, Love, Antosha, which he produced,  Doremus is on a roll with Endings, Beginnings, a story of a love triangle of sorts that really is all concerned with the emotional confusion of its key female lead, Daphne, played by Shailene Woodley in perhaps her most raw and surprising performance to date.

Daphne is coming off a tortured four-year relationship, as well as losing her job, and now swearing off men and liquor for six months and hanging with her sister. While there, she attends a New Year’s party and meets two distinctly different men. There’s the author and intellect  Jack (Jamie Dornan) in one corner, and the intriguingly wild and dangerous Frank (Sebastian Stan) in the other. She is attracted to both and sets off to see each of them, even as she discovers they happen to be buddies. Not to be deterred she veers between both, striking up an erotic and sizzlingly hot and sexually driven affair with the unpredictable Frank and a more traditional coupling with Jack, one involving words rather than sheer physicality. Clearly Daphne is torn, not sure where she is in any way, even when a surprise development throws her for a loop making things even more of a crap shoot. Ultimately, she’s a thirtysomething woman trying to get her act together and not sure which way to go.

Kyra Sedgwick is a soothing voice as an older friend, while Wendie Malick is less so as her disapproving mother, one who doesn’t seem to be a poster child for stability herself. Both veteran stars are superb, if underused. A final scene with Malick, though, is impressive and achingly honest. Matthew Gray Gubler and Lindsay Sloane are among the supporting cast who also have their moments, but this really all belongs to its three stars, each of whom is probably best known for their widely seen franchises (Divergent and Big Little Lies for Woodley, Captain America/Avengers for Stan; Fifty Shades of Grey for Dornan) but get to shine in a different way here as they navigate the pitfalls of acting under the Doremus style of handheld closeups and improvisational dialogue.

Much of the script, such as it is, co-written by Jardine Libaire, is more of an outline that encourages the actors to wing it. Some of the trite exchanges show the dangers of that, but these stars are so sharp they pull most of it off in style, and style is everything here from the look to the cool soft-rock soundtrack. I found myself initially resisting this all as it began (a bit too pretentious) but that was all swept away when the story kicked in and the appeal of these characters became apparent. Stan, in particular, gets to show some real fire, and Dornan, perhaps the actor you might expect to be in Stan’s role, changes up expectations and scores career points here. Woodley continues to prove she is one of the best of her generation.

This movie deserves more than it got when it premiered in September at the Toronto Film Festival, and unfortunately Samuel Goldwyn Films, which picked it up, doesn’t get to go theatrical. But it should hopefully find an appreciative audience when it debuts April 17 on digital platforms and on-demand May 1.

Check out my video review above with scenes from the film. Do you plan to see Endings, Beginnings? Let us know what you think.