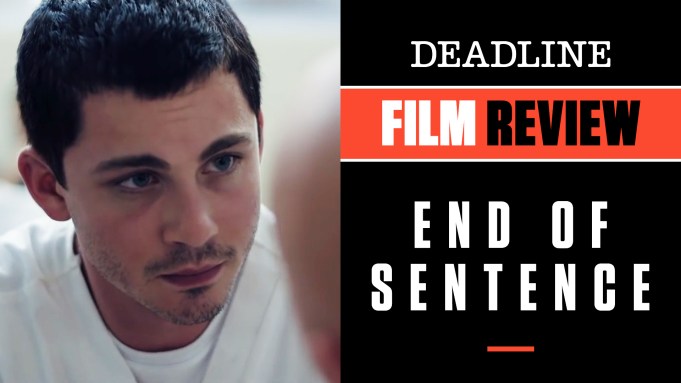 End of Sentence is the kind of small but emotionally effective and beautifully acted movie that likely would have gotten lost in the shuffle with a theatrical release. But on digital platforms and VOD, where it becomes available today, the pic is perfectly poised to be discovered and admired, especially for fans of the always-great John Hawkes, who stars as Frank Fogle.

Frank is a good-hearted but rather helpless husband and father whose wife, Anna (Andrea Irvine), is dying of cancer as the film begins. In a prison scene, we see her visiting their son, Sean (Logan Lerman), and telling him this is going to be her final trip there. He has been incarcerated for auto theft but heading for eventual release.

When Anna dies, leaving her lost husband to fend for himself — she had left notes on prepared dinners to get him through the night —  her final wish is to have her ashes spread in a favorite spot in Ireland. The family dynamic and conflict is laid out clearly when Frank insists and Sean resists accompanying him on the journey to Dublin in order to do this. The estranged son wants nothing to do with his father, determined to head to California instead, but when those plans fizzle out, he finally gives in and goes with his dad with the understanding he never has to see him again.

It is a rocky road all the way amid the contrast between the tough, street-wise and embittered son and a father whose demeanor is 100% the opposite, even being so modest and particular he can’t undress in the same hotel room they share. At one point, Sean attempts to beat up Frank, an act of defiance and pure frustration at the lack of a real relationship that he clearly never had and one that might have set him off in life on a better foot.

Nevertheless, the picaresque journey through Ireland continues; Frank discovers disturbing truths he never knew about his wife’s past; and along the way Sean takes up with Jewel (Sarah Bolger), a woman he meets in a bar. She joins them on the ride but might not be exactly who she appears to be — at least to the impressionable young man who is looking for some sort of human connection that isn’t Frank at this point.

Uncharacteristically for this small type of character study, it briefly turns into a chase picture when Mom’s ashes are left in the back of a rental car that Frank discovers has been stolen from the motel parking lot. This plot development is a little far-fetched for the simple tone previously set by director Elfar Adalsteins and writer Michael Armbruster, and the movie almost goes off the rails into comedic territory. Fortunately, the filmmaker regains control, and all involved find their own level of closure before the credits roll.

What makes End of Sentence work as well as it does, first and foremost, is yet another pitch-perfect portrayal by Hawkes, so good in past films including his Oscar-nominated work in Winter’s Bone and Golden Globe-nominated turn in Sessions, among many other unforgettable performances. This is another along that line, with a quiet dignity from an actor who brings authenticity to every part he plays. Lerman does a nice job opposite him, even if the reasons for the complete dysfunction on display aren’t spelled out clearly. He is forced to play much of the running time in a morose, unappealing fashion that the Perks of Being a Wallflower and 3:10 to Yuma actor overcomes with some later, more nuanced moments. Bolger adds much needed color to the proceedings, but her role serves more as a device than a fully fleshed-out component here in what really is a two-hander between father and son, and an effective one for the most part.

David Collins and Sigurjon Sighvatsson are producers along with Adalsteins. Gravitas Ventures is the distributor. Check out my video review with scenes from the movie by clicking the link above.

Do you plan to see End of Sentence? Let us know what you think.