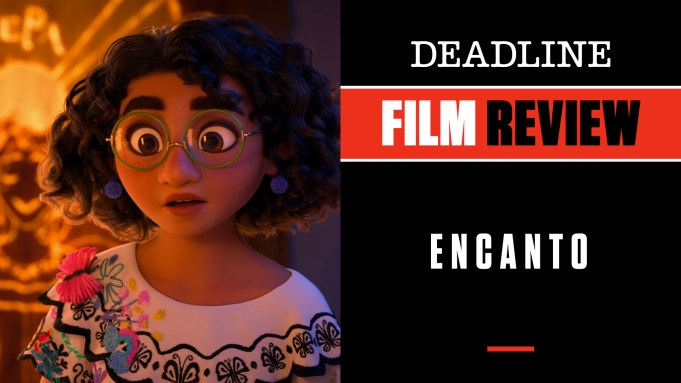 Lin-Manuel Miranda is everywhere this awards season. The screen adaptation of his first Broadway smash In the Heights has hit various home formats after its summer debut. The animated Vivo is running on Netflix. His feature directorial debut tick, tick…BOOM! opened to a rapturous reception at the AFI Fest this week, and down the street on Hollywood Blvd. his stage sensation Hamilton is back live at the Pantages and on Broadway after picking up an Emmy (to add to their Tonys) in September for the original production.

Now if all that wasn’t enough, along comes Encanto, billed as a landmark 60th feature in the canon of Walt Disney Animation Studios. Miranda has contributed eight new songs for this one including the gorgeous “Dos Oruguitas.” It’s the first wall-to-wall Spanish-language song Miranda has written and sure to be in contention for an Oscar nomination, as is the film itself in the Animated Feature category where it is likely to compete with Disney/Pixar’s summer season delight, Luca, a film I actually liked better. That is not to say Encanto is not without its charms. Considering the pedigree, though, it feels maybe just a little less impressive than another Latino family oriented ‘toon from the Mouse House, or rather Pixar, the wonderful Coco , which took home a couple of Oscars for Animated Film and Song (“Remember Me”) in 2018.

Director Byron Howard and co-writer/director Jared Bush dreated 2016’s Oscar winner Zootopia  also registered more strongly for me than this one on the clever scale, but Encanto is sure to please many, particularly younger viewers, with its emphasis on a magical mystical family.

Encanto follows the Madrigals, who live in the mountains of Colombia where each family member, crossing many generations, has been given a unique gift of a special power on their 5th birthday. Now this is no superhero movie, these are far more subtle powers. But nevertheless it really bugs bespectacled young teen Mirabel (voiced by Stephanie Beatriz), who is the only one of her siblings or extended tribe to have been passed over for some reason. She has acquired a sense of impending doom as she finds her own power in trying to save her loved ones from themselves; Only she seems to see the family foundation cracking – literally and figuratively.

The story itself gets a little dense with several characters competing for attention as Mirabel sets off on her own course, even as others do not seem to pay much attention. This includes matriarch Alma (Maria Cecilia Botero), older sister Isabela (Diane Guerro) who is really the golden child, and middle sister Luisa (Jessia Darrow) whose power of super strength leads to some fun bits. Her parents have their own quirks including normally-understanding Julietta (Angie Cepeda) and Augustine (Wilmer Valderrama).

Kids are going to love to obligatory funny creature, in this case a toucan voiced by Alan Tudyk. Stealing the whole show though is the estranged family member Bruno voiced immaculately by John Leguizamo, the guy blessed – or cursed – with psychic abilities to see into the future.

Miranda skillfully finds a way to introduce us to all these characters — and more — in an opening song, “Madrigal Family,” a sharp example of his way of finding words that move the story forward with ease. The film is drenched in Latin tradition and style and visually looks beautiful throughout. As a musical offering this holiday season (Disney opens it exclusively in theaters on November 24), Encanto should offer just enough enchantment to last until we get the 61st Disney animated film. Check out my video review with scenes from the film at the link above. The animated short, Far From The Tree  that Disney is showing before Encanto is actually a real keeper, worth the price of admission alone.

Do you plan to see Encanto? Let us know what you think.