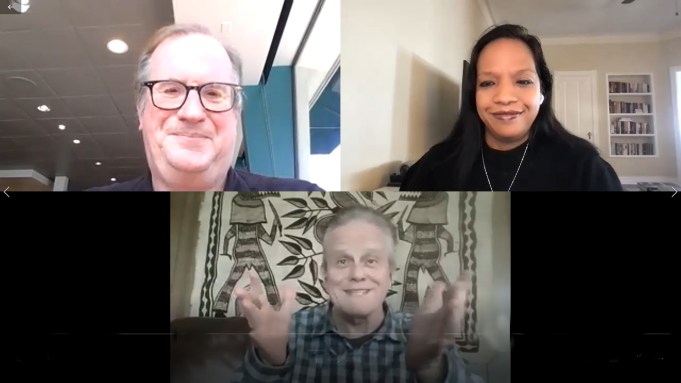 The long and winding Emmy Awards season comes to an end finally on Sunday when the Primetime Emmys are presented on CBS. The Queen’s Gambit, Saturday Night Live, The Mandalorian, Ted Lasso, The Crown and others ran up some impressive totals during last weekend’s three Creative Arts ceremonies, but now we are going to see who is really ready for primetime as the Emmys’ marquee categories are handed out.

Tom O’Neil of Gold Derby, Jazz Tangcay of Variety and I (coming from the heart and noise of a Starbucks due to an internet outage at home when we taped this) fight it out in our final smackdown of the season. We run through every category and analyze the pros and cons of each nominee in a must-watch if you are intending to join a pool and pick the winners yourself.

On the surface the way the winds are blowing is quite clear, with sure-fire frontrunners in Comedy Series for Ted Lasso, Drama Series for The Crown, and Limited or Anthology Series for The Queen’s Gambit. Of course the Emmys, with their particular system of voting, have proven unpredictable in the past and served up some real upsets. Can that happen again? Sure it can, and we give you the 411 on the chances of a surprise or two come Sunday. I even reveal some of my own choices as an Emmy voter just for added value here.

To watch our showdown, and to get the final word before the big show, check out the video above. You can also read my own detailed takes on key categories by scrolling through my nine posts devoted to the program and acting categories.