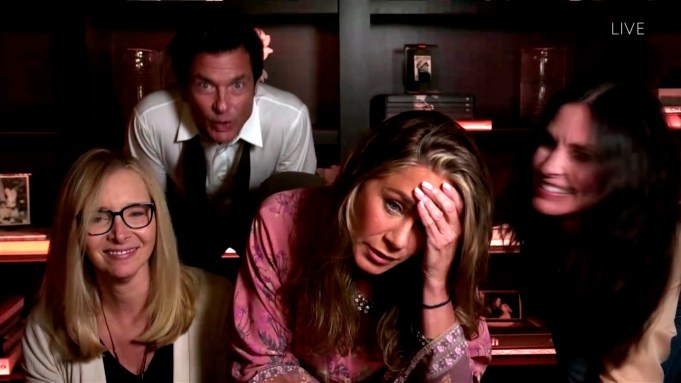 The Emmy awards saw a mini Friends reunion when stars Jennifer Aniston, Courteney Cox and Lisa Kudrow stopped by via Zoom during the annual awards show. In between winner announcements, Kimmel chatted with the Friends stars, who claimed that they still lived together.

“Uh yeah, we’ve been roommates since 1994,” Aniston responded to Kimmel’s question about her “roommates.”

Aniston was first joined by Cox but then Lisa Kudrow joined the call. The Booksmart actress also told the late-night host that she’s also living with her co-stars. “Where else could I live,” she asks the host.

The Emmys night bit continued to be a Friends reunion until Jason Bateman, who made a cameo during Kimmel’s opening monologue, reappeared in the Zoom call. When asked why the Ozark star’s with them, the Friends stars joked that he’s staying at their home “just until he goes off onto college.”

The call goes on to see the Friends stars telling Kimmel that he’s doing a great job hosting the first-ever virtual Emmys ceremony. They lay on the compliments, until one of them mentions that dinner’s ready. Upon mention of food, the actresses leave the call one after another.

Aniston, Kudrow and Cox’s appearance was just a small teaser of what viewers can expect when the Friends reunion comes to HBO Max. The reunion is set to feature David Schwimmer, Matt LeBlanc and Matthew Perry in addition to its leading ladies. Deadline learned that the HBO special was initially set to air in May but has since been delayed due to the COVID-19 pandemic.

Watch the whole vide from the annual awards ceremony above. The virtual 72nd annual Emmy Awards aired Sunday on ABC and Jimmy Kimmel served as host.