Netflix's Ted Sarandos To HFPA: “We’re Stopping Any Activities With Your Organization Until More Meaningful Changes Are Made"
Read the full story
June 16, 2020 11:12am
3Comments 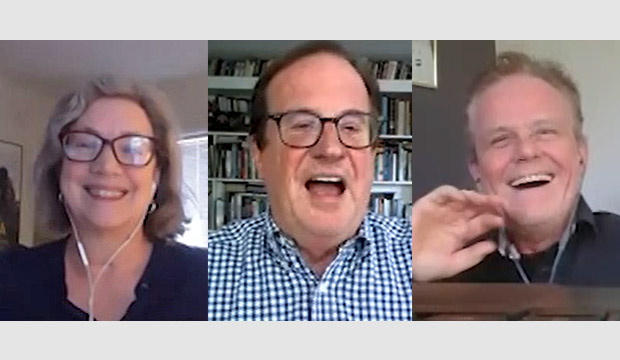 With the beginning of Emmy balloting now just a little over two weeks away, PMC awards experts Tom O’Neil of Gold Derby, Anne Thompson of IndieWire and I gather (virtually) for the first of this season’s Emmy Smackdowns. We take the pulse of this highly unusual coronavirus-impacted contest and throw out predictions on just who might have the upper hand in a number of program and acting races for Comedy Series, Drama Series, Limited Series and the TV Movie categories.

Does the fact that every voter has been sequestered in their homes for the past three months mean a wider swath of programming has been viewed? You bet. How will this treasure trove of available content, and the likely larger number of voter eyes on it, impact the results of this year’s Emmy Awards, and who is most likely to benefit? Seismic events in the world, makeshift virtual television as we have never seen and a completely different landscape as last year’s top series winners Game of Thrones and Fleabag are not part of the conversation this time around, so will previously unrewarded shows like Pop TV’s Schitt’s Creek see their time finally come in the last seasons? Will The Crown at last be crowned in the Drama Series race, or will HBO with Succession again thwart Netflix’s dream of crashing Emmy’s most important awards?

We talk about all of it and more. Today, Jimmy Kimmel was just announced as host and executive producer of the 72nd annual Emmy Awards. How ABC’s September 20 show itself will look is still a mystery, but as for what might be in those envelopes, we can take a few educated guesses.