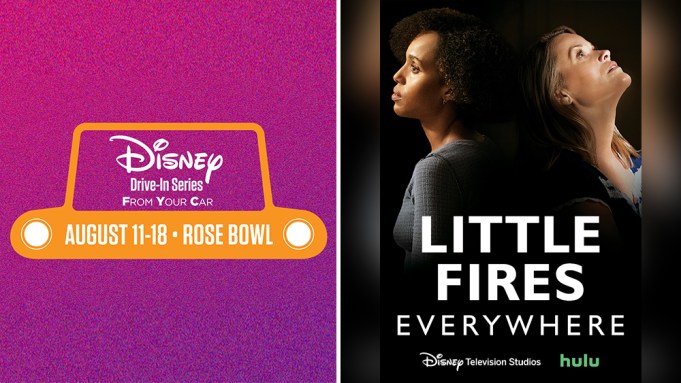 Nominated for five Emmys including Outstanding Limited Series, Hulu’s Little Fires Everywhere got the Disney Drive-In Series experience over the weekend. Industry awards voters packed the Rose Bowl in Pasadena to watch the series finale on the big screen, and three of the major creative forces behind the show joined me – virtually, of course, though some even showed for the preshow in person — for a conversation afterward.

Based on Celeste Ng’s 2017 bestseller, the show is about what happens when a black mother and her teenage daughter move into an affluent white Ohio suburb. Ultimately it becomes the story of two women played by executive producers Kerry Washington and Reese Witherspoon as they navigate each other’s lives and experiences as the series explores themes of motherhood, race, privilege and class in 1990s America.

Joining me were creator, showrunner and executive producer Liz Tigelaar; Lauren Neustadter; executive producer and partner with Witherspoon in the production company Hello Sunshine (which between LFE and 2 other shows has 18 Emmys noms overall); and executive producer Pilar Savone, a partner with Washington in their company Simpson Street. They explained how the series came about and why, even though rhe series is set in the mid-’90s, it has great resonance for today. That seems especially true when our current president is stoking fires and fear in the suburbs by telling “suburban housewives” there are forces trying to change the makeup of their neighborhoods.

“I read the book, and there were so many connectivity moments for me,” Tigelaar told me. “It was something that spoke to me right now, to do a story about motherhood where you really get to explore being a mom and what that’s like. It felt like such a gift at the time and obviously through the lens of race and class.”

Neustadter agreed and points out the subtlety of the approach. “The book and the TV show invite you to have certain assumptions at the beginning, and at the end you realize that all of those thoughts and ideas you had, all those assumptions that you made have been upended, and that maybe a book shouldn’t be judged by its cover,” she said. “Maybe we need to look a little deeper. Maybe we should ask questions so we can understand who people are on the inside and what they have been through because we will never know if we don’t ask.”

Savone talks about the changes from book to screen, including the major decision to cast Washington and change the ethnicity of the character to being a black woman bringing up her daughter alone. “We were really lucky to explore all these questions of race and class,” she said, confirming that Ng was on board with the changes but felt that she could not authentically specify race when she wrote the book.

To watch our conversation at the Disney Drive-In Series just click the link above.