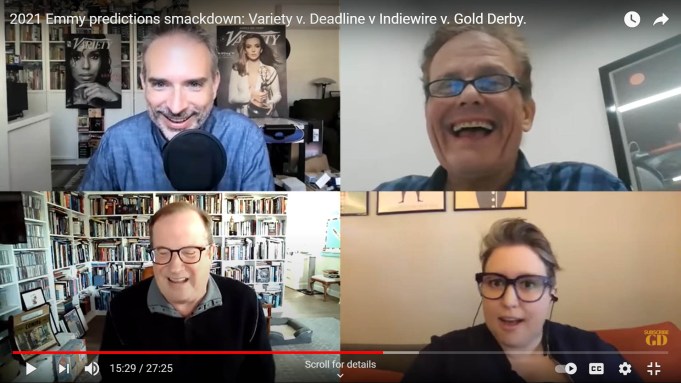 Time for another Emmy smackdown now that nominations have been announced for this year’s increasingly close contest. Joining me for this sometime agreeable, sometimes heated (wait til you see them gang up on me over my approval of the Best Comedy Series nomination for Emily In Paris) conversation are Variety‘s Michael Schneider, IndieWire’s Libby Hill and Gold Derby’s Tom O’Neil, who gets things started with some predictions in the Drama Series race.

We cover the waterfront for those categories, from comedy series and acting contenders to the really tight contest for Outstanding Limited Series, one of the best fields in years and one, sadly, that we point out is just too limited and should be expanded to reflect the outstanding work being done there.

The consensus has been that Netflix finally will see some Emmy love in the major categories with Drama Series frontrunner The Crown, and Limited Series favorite The Queen’s Gambit gaining top odds to win. However, both races have drawn considerably closer since each of those shows swept earlier awards love this year. Can they hold on, or is something else looming to upset their march to the Microsoft Theatre stage? And can Ted Lasso score big for new streamer Apple TV+  or will the surging Hacks again triumph for HBO’s Emmy monolith in the Comedy category?

Lots to talk about and more, so check out our wide-ranging conversation in the video above.